Animated, colour-coded map showing the various continents and regions. Depending on the convention and model, some continents may be consolidated or subdivided: for example, Eurasia is most often subdivided into Asia and Europe (red shades), while North and South America are sometimes recognised as one American continent (green shades).

A continent is one of several very large landmasses on Earth. Generally identified by convention rather than any strict criteria, up to seven regions are commonly regarded as continents. Ordered from largest in size to smallest, they are: Asia, Africa, North America, South America, Antarctica, Europe, and Australia.

Islands are frequently grouped with a neighbouring continent to divide all the world's land into geopolitical regions. Under this scheme, most of the island countries and territories in the Pacific Ocean are grouped together with the continent of Australia to form a geopolitical region called Oceania. 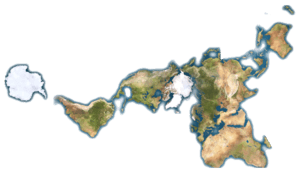 By convention, "continents are understood to be large, continuous, discrete masses of land, ideally separated by expanses of water." Several of the seven conventionally recognized continents are not discrete landmasses separated completely by water. The criterion "large" leads to arbitrary classification: Greenland, with a surface area of 2,166,086 square kilometres (836,330 sq mi) is considered the world's largest island, while Australia, at 7,617,930 square kilometres (2,941,300 sq mi) is deemed the smallest continent.

Earth's major landmasses all have coasts on a single, continuous World Ocean, which is divided into a number of principal oceanic components by the continents and various geographic criteria.

The term Oceania refers to a group of island countries and territories in the Pacific Ocean, together with the continent of Australia. Pacific islands with ties to other continents (such as Japan, Hawaii or Easter Island) are usually grouped with those continents rather than Oceania. This term is used in several different continental models instead of Australia.

Continents not only move but also sometimes move against each other. The Indian subcontinent has been colliding with the Eurasian continent for a while now. As these continents push against each other, they buckle and bend. Because of this, the Himalaya Mountains, where Mount Everest is, are still being made today.

Aside from the conventionally known continents, the scope and meaning of the term continent varies. Supercontinents, largely in evidence earlier in the geological record, are landmasses that comprise more than one craton or continental core. These have included Laurasia, Gondwana, Vaalbara, Kenorland, Columbia, Rodinia, and Pangaea.

Certain parts of continents are recognized as subcontinents, especially the large peninsulas separated from the main continental landmass by geographical features. The most notable examples are the Indian subcontinent and the Arabian Peninsula. The southern cone of South America and Alaskan peninsula of North America are other examples.

In many of these cases, the "subcontinents" concerned are on different tectonic plates from the rest of the continent, providing a geological justification for the terminology. Greenland, generally reckoned as the world's largest island on the northeastern periphery of the North American Plate, is sometimes referred to as a subcontinent. This is a significant departure from the more conventional view of a subcontinent as comprising a very large peninsula on the fringe of a continent.

Some areas of continental crust are largely covered by the sea and may be considered submerged continents. Notable examples are Zealandia, emerging from the sea primarily in New Zealand and New Caledonia, and the almost completely submerged Kerguelen Plateau in the southern Indian Ocean.

Some islands lie on sections of continental crust that have rifted and drifted apart from a main continental landmass. While not considered continents because of their relatively small size, they may be considered microcontinents. Madagascar, the largest example, is usually considered an island of Africa but has been referred to as "the eighth continent" from a . 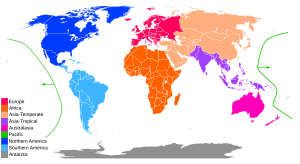 "Continents" may be defined differently for specific purposes. The Biodiversity Information Standards organization has developed the World Geographical Scheme for Recording Plant Distributions, used in many international plant databases. This scheme divides the world into nine "botanical continents". Some match the traditional geographical continents, but some differ significantly. Thus the Americas are divided between Northern America (Mexico northwards) and Southern America (Central America and the Caribbean southwards) rather than between North America and South America.

From the 16th century the English noun continent was derived from the term continent land, meaning continuous or connected land and translated from the Latin terra continens. The noun was used to mean "a connected or continuous tract of land" or mainland. It was not applied only to very large areas of land—in the 17th century, references were made to the continents (or mainlands) of Isle of Man, Ireland and Wales and in 1745 to Sumatra. The word continent was used in translating Greek and Latin writings about the three "parts" of the world, although in the original languages no word of exactly the same meaning as continent was used.

All content from Kiddle encyclopedia articles (including the article images and facts) can be freely used under Attribution-ShareAlike license, unless stated otherwise. Cite this article:
Continent Facts for Kids. Kiddle Encyclopedia.