Oceania (UK /ˌoʊʃiˈɑːniə, ˌoʊsi-/ or US /ˌoʊʃiːˈæniə/), also known as Oceanica, is a region centred on the islands of the tropical Pacific Ocean. Opinions of what constitutes Oceania range from its three subregions of Melanesia, Micronesia, and Polynesia to, more broadly, the entire insular region between Southeast Asia and the Americas, including Australasia and the Malay Archipelago.

The term is often used more specifically to denote a continent comprising Australia and proximate islands or biogeographically as a synonym for either the Australasian ecozone (Wallacea and Australasia) or the Pacific ecozone (Melanesia, Polynesia, and Micronesia, excluding both New Zealand and mainland New Guinea).

The term was coined as Océanie circa 1812 by geographer Conrad Malte-Brun. The word Océanie is a French word derived from the Latin word oceanus, and this from the Greek word ὠκεανός (ōkeanós), ocean. Natives and inhabitants of this region are called Oceanians or Oceanicans.

See also: List of Oceanian countries by population and List of sovereign states and dependent territories in Oceania 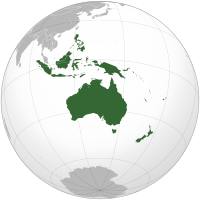 Wider Geographic Oceania.
Little of the South Pacific is apparent at this scale, though Hawaii is just visible near the eastern horizon. 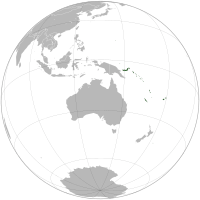 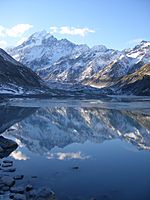 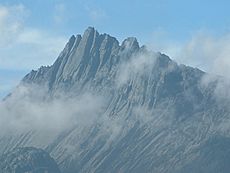 As an ecozone, Oceania includes all of Micronesia, Fiji, and all of Polynesia except New Zealand. New Zealand, along with New Guinea and nearby islands, part of the Philippine islands, Australia, the Solomon Islands, Vanuatu, and New Caledonia, constitute the separate Australasian ecozone. In geopolitical terms, however, New Zealand, the Solomon Islands, Vanuatu and New Caledonia are almost always considered part of Oceania. Australia and Papua New Guinea are usually considered part of Oceania along with the Maluku Islands and Papua in Indonesia. Puncak Jaya in Papua is often considered the highest peak in Oceania.

Oceania was originally conceived as the lands of the Pacific Ocean, stretching from the Strait of Malacca to the coast of the Americas. It comprised four regions: Polynesia, Micronesia, Malaysia (now called the Malay Archipelago), and Melanesia. Today, parts of three geological continents are included in the term "Oceania": Eurasia, Australia, and Zealandia, as well the non-continental volcanic islands of the Philippines, Wallacea, and the open Pacific. The area extends to Sumatra in the west, the Bonin Islands in the northwest, the Hawaiian Islands in the northeast, Rapa Nui and Sala y Gómez Island in the east, and Macquarie Island in the south. Not included are the Pacific islands of Taiwan, the Ryukyu Islands and the Japanese archipelago, all on the margins of Asia, and the Aleutian Islands of North America.

The islands at the geographic extremes of Oceania are Bonin, a politically integral part of Japan, Hawaii, a state of the United States, and Easter Island, belonging to Chile. There is also a smaller geographic definition that excludes land on the Sunda Plate but includes Indonesian New Guinea on the Australian continent.

Biogeographically, Oceania is used as a synonym for either the Australasian ecozone (Wallacea and Australasia) or the Pacific ecozone (Melanesia, Polynesia, and Micronesia apart either from New Zealand or from mainland New Guinea).

Oceania is one of eight terrestrial ecozones, which constitute the major ecological regions of the planet. The Oceania ecozone includes all of Micronesia, Fiji, and all of Polynesia except New Zealand. New Zealand, New Guinea, Melanesia apart from Fiji, and Australia constitute the separate Australasian ecozone. The Malay Archipelago is part of the Indomalaya ecozone. Related to these concepts are Near Oceania, that part of western Island Melanesia which has been inhabited for tens of millennia, and Remote Oceania which is more recently settled.

In the geopolitical conception used by the United Nations, International Olympic Committee, and many atlases, Oceania includes Australia and the nations of the Pacific from Papua New Guinea east, but not the Malay Archipelago or Indonesian New Guinea.

The history of Oceania in the medieval period was synonymous with the history of the indigenous peoples of Australasia, Micronesia, Melanesia, Polynesia. The arrival of European settlers in subsequent centuries resulted in a significant alteration in the social and political landscape of Oceania. In more contemporary times there has been increasing discussion on national flags and a desire by some Oceanians to display their distinguishable and individualistic identity.

The linked map below shows the Exclusive economic zones (EEZs) of the islands of Oceania and neighbouring areas, as a guide to the following table. (There are no political boundaries that can be drawn on a map of the Pacific at this scale.)

The demographic table below shows the subregions and countries of geopolitical Oceania. The countries and territories in this table are categorised according to the scheme for geographic subregions used by the United Nations. The information shown follows sources in cross-referenced articles; where sources differ, provisos have been clearly indicated. These territories and regions are subject to various additional categorisations, of course, depending on the source and purpose of each description. 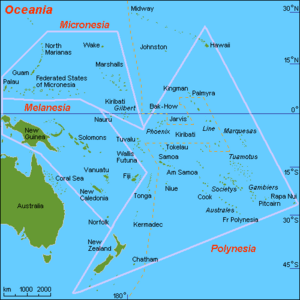 Geographic map of islands of Oceania

Archaeology, linguistics, and existing genetic studies indicate that Oceania was settled by two major waves of migration. The first migration took place approximately 40 thousand years ago, and these migrants, Papuans, colonised much of Near Oceania. Approximately 3.5 thousand years ago, a second expansion of Austronesian speakers arrived in Near Oceania, and the descendants of these people spread to the far corners of the Pacific, colonising Remote Oceania.

Mitochondrial DNA (mtDNA) studies quantify the magnitude of the Austronesian expansion and demonstrate the homogenising effect of this expansion. With regards to Papuan influence, autochthonous haplogroups support the hypothesis of a long history in Near Oceania, with some lineages suggesting a time depth of 60 thousand years. Santa Cruz, a population located in Remote Oceania, is an anomaly with extreme frequencies of autochthonous haplogroups of Near Oceanian origin.

The predominant religion in Oceania is Christianity (73.3%). A 2011 survey found that 65.6% of Australia and New Zealand population, 92.1% in Melanesia, 93.1% in Micronesia and 96.1% in Polynesia described themselves as Christians.

Traditional religions are often animist, and prevalent among traditional tribes is the belief in spirits (masalai in Tok Pisin) representing natural forces. In recent Australian and New Zealand censuses, large proportions of the population say they belong to "no religion" (which includes atheism, agnosticism, deism, secular humanism, and rationalism). In Tonga, everyday life is heavily influenced by Polynesian traditions and especially by the Christian faith. The Ahmadiyya mosque in Marshall Islands is the only mosque in Micronesia. Another one in Tuvalu belongs to the same sect. The Bahá'í House of Worship in Tiapapata, Samoa, is one of seven designations administered in the Bahá'í Faith.

All content from Kiddle encyclopedia articles (including the article images and facts) can be freely used under Attribution-ShareAlike license, unless stated otherwise. Cite this article:
Oceania Facts for Kids. Kiddle Encyclopedia.