The Japanese language is very different from English and most other European languages. Like Finnish, Turkish, and Korean, Japanese is an agglutinating language, with two (phonologically distinctive) tones like Serbian/Croatian and Swedish. It is a language where sentences need no subject and adjectives can have past tenses.

Little is known of the language's prehistory, or when it first appeared in Japan. Chinese documents from the 3rd century recorded a few Japanese words, but substantial texts did not appear until the 8th century. During the Heian period (794–1185), Chinese had considerable influence on the vocabulary and phonology of Old Japanese. 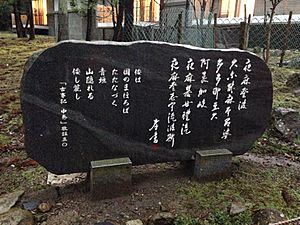 A poem of “Kojiki” near Kasuga Grand Shrine

In English, the order of the words is very important. For example, the sentences "Is it?" and "It is." mean different things. In Japanese a lot of these differences are made by adding or changing the endings of words.

Japanese often use titles of the person referred to where pronouns would be used in English. For example, when speaking to one's teacher, it is appropriate to use sensei (先生, teacher), but inappropriate to use anata. This is because anata is used to refer to people of equal or lower status, and one's teacher has higher status.

The Japanese language can express differing levels in social status. The differences in social position are determined by a variety of factors including job, age, experience, or even psychological state (e.g., a person asking a favour tends to do so politely). The person in the lower position is expected to use a polite form of speech, whereas the other person might use a plainer form. Strangers will also speak to each other politely. Japanese children rarely use polite speech until they are teens, at which point they are expected to begin speaking in a more adult manner. 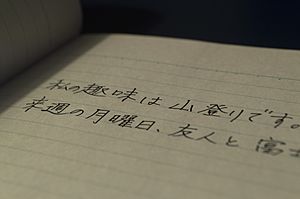 This picture shows what Japanese writing system (yokogaki) looks like

Many major universities throughout the world provide Japanese language courses, and a number of secondary and even primary schools worldwide offer courses in the language. This is much changed from before World War II; in 1940, only 65 Americans not of Japanese descent were able to read, write and understand the language.

International interest in the Japanese language dates from the 19th century but has become more prevalent following Japan's economic bubble of the 1980s and the global popularity of Japanese popular culture (such as anime and video games) since the 1990s. Close to 4 million people studied the language worldwide in 2012.

In Japan, more than 90,000 foreign students studied at Japanese universities and Japanese language schools, including 77,000 Chinese and 15,000 South Koreans in 2003. In addition, local governments and some NPO groups provide free Japanese language classes for foreign residents. In the United Kingdom, study of the Japanese language is supported by the British Association for Japanese Studies. In Ireland, Japanese is offered as a language in the Leaving Certificate in some schools.

All content from Kiddle encyclopedia articles (including the article images and facts) can be freely used under Attribution-ShareAlike license, unless stated otherwise. Cite this article:
Japanese language Facts for Kids. Kiddle Encyclopedia.