The Tale of Genji facts for kids 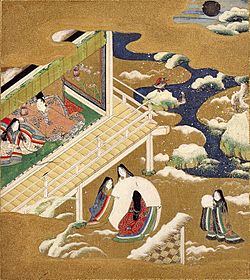 The Tale of Genji (源氏物語code: ja is deprecated , Genji Monogatari) is a classic work of Japanese literature.

It is believed to have been written by the Japanese noblewoman Murasaki Shikibu at the beginning of the 11th century, around the highest point of the Heian Period. The form of the language used at that time is called Late Old Japanese. The Tale of Genji is sometimes called the world's first novel, the first modern novel, or the first novel to still be considered a classic, but many readers do not agree on this.

Japanese cultural scholar Motoori Norinaga first used the term Mono no aware in his review of the book. This term in now important in understanding Japanese literature.

The first translation of part of Genji Monogatari into English was by Suematsu Kencho. It was notably translated by Japanese nun Jakucho Setouchi in 1998. Arthur Waley made a free translation of the work, except for one chapter. Edward Seidensticker made the first complete translation into English, using a more literal way than Waley. The most recent English translation, by Royall Tyler (2002), also tries to respect the original text.

All content from Kiddle encyclopedia articles (including the article images and facts) can be freely used under Attribution-ShareAlike license, unless stated otherwise. Cite this article:
The Tale of Genji Facts for Kids. Kiddle Encyclopedia.