In this Japanese name, the family name is Murasaki. 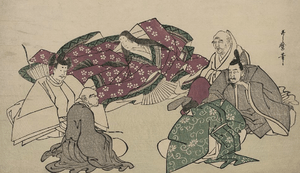 Murasaki Shikibu (紫式部code: ja is deprecated , c. 973 – c. 1020) was a novelist, poet, and servant of the Imperial Court during the Heian period of Japan. She is well known as the author of The Tale of Genji, written around year 1003.

Murasaki Shikibu is a nickname; her real name is unknown.

Murasaki was born in Kyoto. She was born into the Fujiwara family. Her father, Fujiwara Tametoki, was not a very nice father and when Murasaki got older he confessed that he regretted she was not a boy.

Murasaki started as a writer soon after her husband's unexpected death. She was recognized immediately, and she was asked to the imperial court as a tutor to Empress Shoshi ( Joto Mon'in, 988–1074), daughter of the statesman Fujiwara Michinaga (966–1027). Murasaki joined the court of Empress Shōshi in 1006, probably for her skills as an author.

Murasaki started writing her diary in 1008, and finished in 1010. Her diary describes her Chinese lessons with her brother Nobunori (980?–1011), daily life and how much she missed her husband after his death.

The Tale of Genji

The Tale of Genji is split into 54 different books, and is made up of 795 different poems. It is one of the earliest novels in Japanese, and is often thought of as the first novel in the world. It is a classic of Japanese literature. The masterpiece was about the court life of Prince Genji, and his wife, Aoi in 10th-century Japan. Prince Genji was the illegitimate son of an emperor, and the text is about his relationships in court. The Tale of Genji included many beautiful scroll paintings.

All content from Kiddle encyclopedia articles (including the article images and facts) can be freely used under Attribution-ShareAlike license, unless stated otherwise. Cite this article:
Murasaki Shikibu Facts for Kids. Kiddle Encyclopedia.