Classical Chinese or literary Chinese is a traditional register of written Chinese. It is based on the grammar and vocabulary of ancient Chinese, so it is different from any modern spoken form of Chinese. Classical Chinese was once used for almost all formal writing before and during the beginning of the 20th century in China, and during various different periods in Korea, Japan and Vietnam. Among Chinese speakers, Classical Chinese has been largely replaced by written vernacular Chinese, or 白话/白話 báihuà ("plain speech"). Written Vernacular Chinese is a writing style very closely related to modern spoken Mandarin Chinese. At the same time, non-Chinese speakers have largely given up Classical Chinese, and use their local languages or dialects instead.

Many modern Chinese words and phrases either came from northern dialects or are loanwords from other languages such as Mongolian or Korean.

Due to the changes of the spoken Chinese over the centuries, spoken Chinese lost many sounds that existed in older dialects, and therefore many words in Classical Chinese were beginning to sound too similar to each other. In other words, although documents written in Classical Chinese can be reasonably understood by someone who can read Chinese, they can be very difficult to understand when they are read aloud. One-syllable articles, or poems written in Classical Chinese in which every word in the poem is pronounced by the same syllable, are perfect examples that how impractical Classic is as a spoken language. The title of one poem 施氏食狮史 (Shī Shì Shí Shī Shǐ), known as the "Lion-Eating Poet of the Stone Den" in English, literally translates to "The Story of Shi Shi Eating Lions". Every single word of the poem is pronounced "shi", even though they have different tones. If the title were to be translated into Standard Chinese, it be read something like 施氏吃狮子的史诗 (Shī Shì chī shīzi de shǐshī).

Structurally, words in Classical Chinese tend to be much simpler because they are usually made up of one Chinese character, whereas most words in Standard Chinese are made of two to four characters. This is so that the writer can write what they want to write using as few characters as possible. Examples are found below.

Once again, due to the merging of Chinese sounds, extra characters are added to words in Standard Chinese to distinguish similar-sounding words that would otherwise be indistinguishable.

Examples of phrases in Classical Chinese is Confucius's famous quote 有教舞類 (yǒu jiào wǔ lèi), which roughly translates to, "In education, there should be no class distinction." 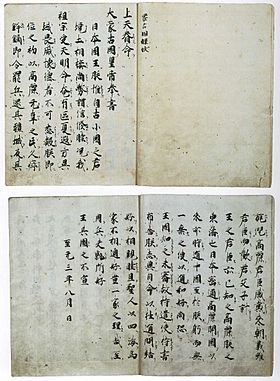 Classical Chinese was used in international communication between the Mongol Empire and Japan. This letter, dated 1266, was sent from Khubilai Khan to the "King of Japan" (日本國王) before the Mongol invasions of Japan

; it was written in Classical Chinese. Now stored in Tōdai-ji, Nara, Japan. There are some grammar notes on it, which were to help Japanese speakers better understand it.]]

Classical Chinese was the main form used in Chinese literary works until the May Fourth Movement, and was also used extensively in Japan, Korea, and Vietnam.

Most government documents in the Republic of China were written in Classical Chinese until reforms in the 1970s, in a reform movement spearheaded by President Yen Chia-kan to shift the written style to vernacular Chinese.

All content from Kiddle encyclopedia articles (including the article images and facts) can be freely used under Attribution-ShareAlike license, unless stated otherwise. Cite this article:
Classical Chinese Facts for Kids. Kiddle Encyclopedia.