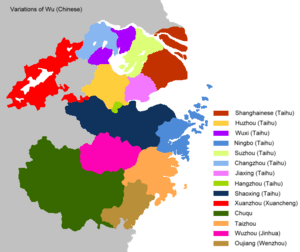 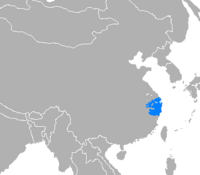 Areas where Wu is spoken

Wu is a group of Chinese dialects spoken in the area around Shanghai in southern China.

Wu dialects have been spoken by some important people such as Chiang Kai-shek. However, Wu speakers are similar to speakers of Spanish and French because they can not always understand each other. In fact, the name Wu is mainly used by people who study languages.

There are various subgroups of the Wu dialect.

Like other types of Chinese, the Wu dialects are starting to be replaced by Mandarin as time goes on.

All content from Kiddle encyclopedia articles (including the article images and facts) can be freely used under Attribution-ShareAlike license, unless stated otherwise. Cite this article:
Wu Chinese Facts for Kids. Kiddle Encyclopedia.