Jiangsu is a province of the People's Republic of China, located along the east coast of the country.

Jiangsu borders Shandong in the north, Anhui to the west, and Zhejiang and Shanghai to the south. Jiangsu has a coastline of over 1,000 km along the Yellow Sea, and the Yangtze River passes through its southern parts.

Jiangsu is home to many of the world's leading exporters of electronic equipment, chemicals and textiles. It has also been China's largest recipient of foreign direct investment since 2006. 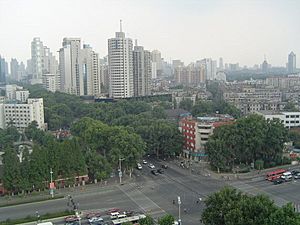 Silkworms also form an important part of Jiangsu's agriculture, with the Lake Taihu region to the south a major base of silk production in China. Jiangsu is also an important producer of freshwater fish and other aquatic products.

Jiangsu has coal, petroleum, and natural gas deposits, but its most significant mineral products are non-metal minerals such as halite (rock salt), sulfur, phosphorus, and marble. The city of Xuzhou is a coal hub of China. The salt mines of Huaiyin have more than 0.4 trillion tonnes of deposits, one of the greatest collections of deposits in China.

Jiangsu is very wealthy among the provinces of China, with the second highest total gross domestic product (after Guangdong Province), it is one of the most prosperous regions in China.

All content from Kiddle encyclopedia articles (including the article images and facts) can be freely used under Attribution-ShareAlike license, unless stated otherwise. Cite this article:
Jiangsu Facts for Kids. Kiddle Encyclopedia.