Halite is the mineral a lot of people call "rock salt". It is a different form of sodium chloride (NaCl). It looks like it is made out of cubes. 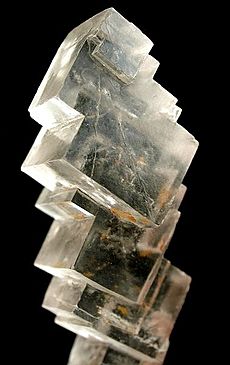 Halite occurs in vast beds of sedimentary evaporite minerals that result from the drying up of enclosed lakes, playas, and seas. Salt beds may be hundreds of meters thick and underlie broad areas. In the United States and Canada extensive underground beds extend from the Appalachian basin of western New York through parts of Ontario and under much of the Michigan Basin. Other deposits are in Ohio, Kansas, New Mexico, Nova Scotia and Saskatchewan. The Khewra salt mine is a massive deposit of halite near Islamabad, Pakistan. In the United Kingdom there are three mines; the largest of these is at Winsford in Cheshire producing on average a million tonnes per year.

Salt domes are vertical diapirs or pipe-like masses of salt that have been essentially "squeezed up" from underlying salt beds by mobilization due to the weight of overlying rock. Salt domes contain anhydrite, gypsum, and native sulfur, in addition to halite and sylvite. They are common along the Gulf coasts of Texas and Louisiana and are often associated with petroleum deposits. Germany, Spain, the Netherlands, Romania and Iran also have salt domes. Salt glaciers exist in arid Iran where the salt has broken through the surface at high elevation and flows downhill. In all of these cases, halite is said to be behaving in the manner of a rheid.

Unusual, purple, fibrous vein filling halite is found in France and a few other localities. Halite crystals termed hopper crystals appear to be "skeletons" of the typical cubes, with the edges present and stairstep depressions on, or rather in, each crystal face. In a rapidly crystallizing environment, the edges of the cubes simply grow faster than the centers. Halite crystals form very quickly in some rapidly evaporating lakes resulting in modern artifacts with a coating or encrustation of halite crystals. Halite flowers are rare stalactites of curling fibers of halite that are found in certain arid caves of Australia's Nullarbor Plain. Halite stalactites and encrustations are also reported in the Quincy native copper mine of Hancock, Michigan.

Halite is often used both residentially and municipally for managing ice. Because brine (a solution of water and salt) has a lower freezing point than pure water, putting salt or saltwater on ice that is near 0 °C (32 °F) will cause it to melt. (This effect is called freezing-point depression.) It is common for homeowners in cold climates to spread salt on their sidewalks and driveways after a snow storm to melt the ice. It is not necessary to use so much salt that the ice is completely melted; rather, a small amount of salt will weaken the ice so that it can be easily removed by other means. Also, many cities will spread a mixture of sand and salt on roads during and after a snowstorm to improve traction. In addition to de-icing, rock salt is occasionally used in agriculture. An example of this would be inducing salt stress to suppress the growth of annual meadow grass in turf production.

Salt is also used extensively in cooking as a flavor enhancer and to cure a wide variety of foods such as bacon and fish. Larger pieces can be ground in a salt mill or dusted over food from a shaker as finishing salt.

Some cultures, especially in Africa, prefer a wide variety of different rock salts for different dishes. Pure salt is avoided as particular colors of salt indicates the presence of different impurities. Many recipes call for particular kinds of rock salt, and imported pure salt often has impurities added to adapt to local tastes.

All content from Kiddle encyclopedia articles (including the article images and facts) can be freely used under Attribution-ShareAlike license, unless stated otherwise. Cite this article:
Halite Facts for Kids. Kiddle Encyclopedia.