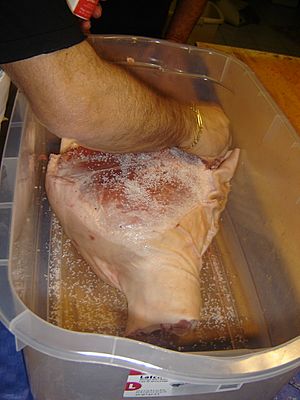 Sea salt being added to raw ham to make prosciutto

Curing is any of various food preservation and flavoring processes of foods such as meat, fish and vegetables, by the addition of combinations of salt, nitrates, nitrites, or sugar, with the aim of drawing moisture out of the food by the process of osmosis. Many curing processes also involve smoking, spicing, or cooking.

Dehydration was the earliest form of food curing. Because curing increases the solute concentration in the food and hence decreases its water potential, the food becomes inhospitable for the microbe growth that causes food spoilage. Curing can be traced back to antiquity, and was the primary way of preserving meat and fish until the late 19th century.

Nitrates and nitrites, in conjunction with salt, are one of the most common agents in curing meat because they further inhibit the growth of Clostridium botulinum. They also contribute to the characteristic pink color.

Meat preservation in general (of meat from livestock, game, and poultry) is the set of all treatment processes for preserving the properties, taste, texture, and color of raw, partially cooked, or cooked meats while keeping them edible and safe to consume. Curing has been the dominant method of meat preservation for thousands of years, although modern developments like refrigeration and synthetic preservatives are now beginning to complement and supplant it.

While meat preservation processes like curing were mainly developed in order to prevent disease and increase food security, the advent of modern preservation methods mean that in most developed countries today, curing is instead mainly practised for its cultural value and desirable impact on the texture and taste of food. For lesser-developed countries, curing remains a key process in ensuring the viability of meat production, transport and access. 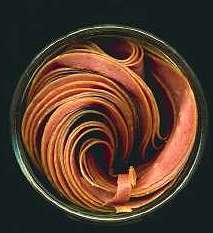 Slices of beef in a can

Untreated meat decomposes rapidly if it is not preserved, at a speed that depends on several factors, including ambient humidity, temperature, and the presence of pathogens. Most meats cannot be kept at room temperature in excess of a few days without spoiling, even in winter.

If kept in excess of this time, meat begins to change colour and exude a foul odour, indicating the decomposition of the food. Ingestion of such spoiled meat can cause serious food poisonings, like botulism.

While the short shelf life of fresh meat does not pose a significant problem when access to it is easy and supply is abundant, in times of scarcity and famine, or when the meat must be carried over long voyages, it spoils very quickly. In such circumstances the usefulness of preserving foods containing nutritional value for transport and storage is obvious.

Curing is able to significantly extend the life of meat before it spoils, by making it inhospitable to the growth of spoilage microbes. 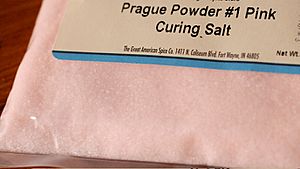 Curing salt, also known as "Prague powder" or "pink salt", is typically a combination of sodium chloride and sodium nitrite that is dyed pink to distinguish it from table salt 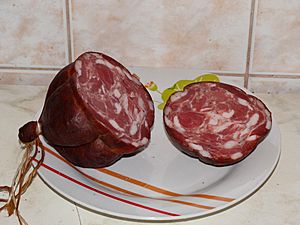 Food curing dates back to ancient times, both in the form of smoked meat and salt-cured meat. Table salt (sodium chloride) is the primary ingredient used in meat curing. The sugar added to meat for the purpose of curing it comes in many forms, including honey, corn syrup solids, and maple syrup. However, with the exception of bacon, it does not contribute much to the flavor, but it does alleviate the harsh flavor of the salt.

Meat can also be preserved by "smoking", which means exposing it to smoke from burning or smoldering plant materials, usually wood. If the smoke is hot enough to slow-cook the meat, it will also keep it tender. One method of smoking calls for a smokehouse with damp wood chips or sawdust. In North America, hardwoods such as hickory, mesquite, and maple are commonly used for smoking, as are the wood from fruit trees such as apple, cherry, and plum, and even corncobs.

Smoking helps seal the outer layer of the food being cured, making it more difficult for bacteria to enter. It can be done in combination with other curing methods such as salting. Common smoking styles include hot smoking, smoke roasting (pit barbecuing) and cold smoking. Smoke roasting and hot smoking cook the meat while cold smoking does not. If the meat is cold smoked, it should be dried quickly to limit bacterial growth during the critical period where the meat is not yet dry. This can be achieved, as with jerky, by slicing the meat thinly.

The improvement of methods of meat preservation, and of the means of transport of preserved products, has notably permitted the separation of areas of production and areas of consumption, which can now be distant without it posing a problem, permitting the exportation of meats.

For example, the appearance in the 1980s of preservation techniques under controlled atmosphere sparked a small revolution in the world's market for sheep meat: the lamb of New Zealand, one of the world's largest exporters of lamb, could henceforth be sold as fresh meat, since it could be preserved from 12 to 16 weeks, which would be a sufficient duration for it to reach Europe by boat. Before, meat from New Zealand was frozen, thus had a much lower value on European shelves.

All content from Kiddle encyclopedia articles (including the article images and facts) can be freely used under Attribution-ShareAlike license, unless stated otherwise. Cite this article:
Curing (food preservation) Facts for Kids. Kiddle Encyclopedia.