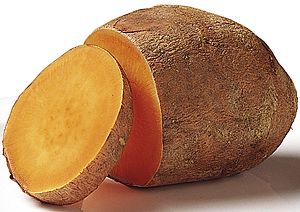 A sweet potato with one slice cut off. 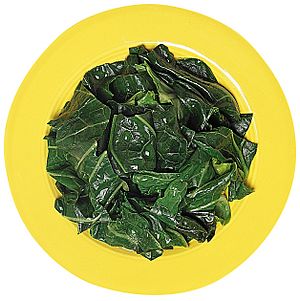 Vegetables are parts of plants that are eaten by humans as food as part of a meal. This meaning is often used: it is applied to plants collectively to mean all edible plant matter, including the flowers, fruits, stems, leaves, roots, and seeds. The alternative definition of the term 'vegetable' may exclude foods derived from some plants that are fruits, nuts, and cereal grains, but include fruits from others such as tomatoes and courgettes and seeds such as pulses.

Carrots and potatoes are parts of the root systems of the plants, but since they are eaten by humans, they are vegetables. They are not in the same category as a fruit, nut, herb, spice, or grain. Though tomatoes are often thought of as vegetables, but because they have seeds, they are, botanically, fruits. Vegetables are an important part of people's daily diet. Vegetables and fruits are sometimes called produce. Vegetables have vitamins A, B, C, D, minerals and carbohydrates.

All content from Kiddle encyclopedia articles (including the article images and facts) can be freely used under Attribution-ShareAlike license, unless stated otherwise. Cite this article:
Vegetable Facts for Kids. Kiddle Encyclopedia.