Cucumber (Cucumis sativus) is a widely cultivated plant in the gourd family, Cucurbitaceae. It is a creeping vine that bears fruits that are used as vegetables. There are three main varieties of cucumber: slicing, pickling, and seedless. Within these varieties, several cultivars have been created.

The cucumber is originally from South Asia, but now grows on most continents. Many different types of cucumber are traded on the global market. In 2014, world production of cucumbers and gherkins was 75 million tonnes, led by China with 76% of the total. In 2009, an international team of researchers announced they had sequenced the cucumber genome.

The cucumber is a creeping vine that roots in the ground and grows up trellises or other supporting frames, wrapping around supports with thin, spiraling tendrils. The plant may also root in a soilless medium and will sprawl along the ground if it does not have supports. The vine has large leaves that form a canopy over the fruits.

The fruit of typical cucumber is roughly cylindrical, but elongated with tapered ends, and may be as large as 60 centimeters (24 in) long and 10 centimeters (3.9 in) in diameter. Much like tomato and squash, it is often perceived, prepared and eaten as a vegetable. Cucumber fruits consist of 95% water.

Depending on variety, cucumbers may have a mild melon aroma and flavor.

Most cucumbers are seeded and require pollination. Thousands of hives of honey bees are annually carried to cucumber fields just before bloom for this purpose. Traditional cucumbers produce male blossoms first, then female, in about equivalent numbers.

In a 100-gram serving, raw cucumber (with peel) is 95% water and supplies low content of essential nutrients, as it is notable only for vitamin K at 16% of the Daily Value. 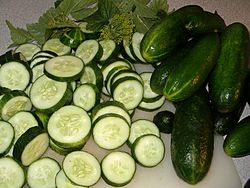 Cucumbers grown to eat fresh are called slicing cucumbers. The main varieties of slicers mature on vines with large leaves that provide shading. They are mainly eaten in the unripe green form, since the ripe yellow form normally becomes bitter and sour. Slicers grown commercially for the North American market are generally longer, smoother, more uniform in color, and have a much tougher skin. Slicers in other countries are smaller and have a thinner, more delicate skin. Smaller slicing cucumbers can also be pickled. 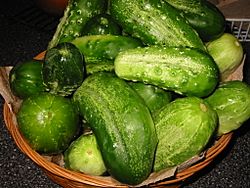 When pickled for flavor and longer shelf-life, cucumbers are called "gherkins" (mainly in the United Kingdom, UK) or "pickle" (in the United States and Canada). Although any cucumber can be pickled, commercial pickles are made from cucumbers specially bred for uniformity of length. 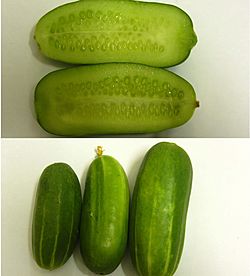 Burpless cucumbers are sweeter and have a thinner skin than other varieties of cucumber, and are reputed to be easy to digest and to have a pleasant taste. They can grow as long as 2 feet (0.61 m). They are nearly seedless, and have a delicate skin. Most commonly grown in greenhouses, these cucumbers are often found in grocery markets, shrink-wrapped in plastic. They are sometimes marketed as seedless or burpless, because the seeds and skin of other varieties of cucumbers are said to give some people gas.

Several other types of cucumbers are sold commercially :

The cucumber originated in India, where a great many varieties have been observed. It has been cultivated for at least 3,000 years, and was probably introduced to other parts of Europe by the Greeks or Romans. Records of cucumber cultivation appear in France in the 9th century, England in the 14th century, and in North America by the mid-16th century.

All content from Kiddle encyclopedia articles (including the article images and facts) can be freely used under Attribution-ShareAlike license, unless stated otherwise. Cite this article:
Cucumber Facts for Kids. Kiddle Encyclopedia.