The Democratic Socialist Republic of Sri Lanka (in Sinhala in Tamil) is a tropical island nation off the southeast coast of the Indian subcontinent. The capital of the country is Sri Jayawardanapura while the largest city is Colombo.

It was known as Ceylon before 1972, and Serendib and Sinhale, among other names, before that. It was South Asia's oldest democracy.

Sri Lanka has three main ethnic groups. They differ in their religions and origins, and there has often been difficulties between the groups. The total population of the island is over 20 million people, and rapidly expanding.

The largest of the three groups is the population of Sinhalese people, most of whom are Buddhist, and who have their own language, Sinhala. They make up about 75% of the population.

The second largest group is the Tamil people, who are Hindu. There are about 2,271,000 Tamils in Sri Lanka.

The third largest group is the Sri Lankan Moors, who are Muslim. There are over one and a half million people in this group. They use Tamil as their language today.

There are a number of smaller ethnic groups, of which the Veddas are notable because they may be the original inhabitants of the island, or at any rate the earliest to survive today. They have "indigenous people" status in the island. 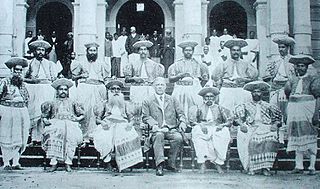 The island was subject to waves of European settlement and eventually colonisation. The Portugese in the 16th and 17th centuries, the Dutch in the 17th and 18th centuries, and lastly the British from 1796 to 1948. The British, always interested in trade, developed plantations of coffee and tea. Tea was planted after a fungus destroyed the coffee plantations in 1869. The tea plantations were the basis of Sri Lankan prosperity for a hundred years. Lastly, rubber plantations were started in the early 20th century. In 1965, Ceylon became the world's leading exporter of tea, with 200,000 tonnes of tea being shipped internationally annually.

Independence from the British was got in 1948, together with Dominion status in the British Commonwealth of Nations. In 1972, Ceylon changed its name officially to the Republic of Sri Lanka, and is still a member of the Commonwealth.

In 2009 came the end of a long civil war between Sinhalese and Tamils. Since then tourism has rapidly grown as a source of foreign investment and currency. 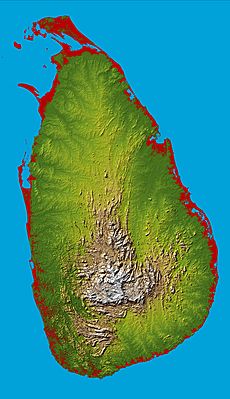 Sri Lanka lies on the Indian Plate, a major tectonic plate that was formerly part of the Indo-Australian Plate. It is in the Indian Ocean southwest of the Bay of Bengal, between latitudes 5° and 10°N, and longitudes 79° and 82°E. Sri Lanka is separated from the mainland portion of the Indian subcontinent by the Gulf of Mannar and Palk Strait. According to Hindu mythology, a land bridge existed between the Indian mainland and Sri Lanka. It now amounts to only a chain of limestone shoals remaining above sea level. Legends claim that it was passable on foot up to 1480 AD, until cyclones deepened the channel. Portions are still as shallow as 1 metre (3 ft), hindering navigation. The island consists mostly of flat to rolling coastal plains, with mountains rising only in the south-central part. The highest point is Pidurutalagala, reaching 2,524 metres (8,281 ft) above sea level. 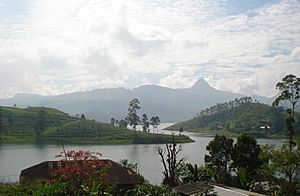 A view of Sripada from Maskeliya

Sri Lanka has 103 rivers. The longest of these is the Mahaweli River, extending 335 kilometres (208 mi). These waterways give rise to 51 natural waterfalls of 10 meters or more. The highest is Bambarakanda Falls, with a height of 263 metres (863 ft). Sri Lanka's coastline is 1,585 km long. Sri Lanka claims an Exclusive Economic Zone (EEZ) extending 200 nautical miles, which is approximately 6.7 times Sri Lanka's land area. The coastline and adjacent waters support highly productive marine ecosystems such as fringing coral reefs and shallow beds of coastal and estuarine seagrasses.

Sri Lanka has 45 estuaries and 40 lagoons. Sri Lanka's mangrove ecosystem spans over 7,000 hectares and played a vital role in buffering the force of the waves in the 2004 Indian Ocean tsunami. The island is rich in minerals such as ilmenite, feldspar, graphite, silica, kaolin, mica and thorium. Existence of petroleum and gas in the Gulf of Mannar has also been confirmed and the extraction of recoverable quantities is underway.

Rainfall pattern is influenced by monsoon winds from the Indian Ocean and Bay of Bengal. The "wet zone" and some of the windward slopes of the central highlands receive up to 2,500 millimetres (98.4 in) of rain each year, but the leeward slopes in the east and northeast receive little rain. Most of the east, southeast, and northern parts of Sri Lanka comprise the "dry zone", which receives between 1,200 and 1,900 mm (47 and 75 in) of rain annually.

The arid northwest and southeast coasts receive the least amount of rain at 800 to 1,200 mm (31 to 47 in) per year. Periodic squalls occur and sometimes tropical cyclones bring overcast skies and rains to the southwest, northeast, and eastern parts of the island. Humidity is typically higher in the southwest and mountainous areas and depends on the seasonal patterns of rainfall.

An increase in average rainfall coupled with heavier rainfall events has resulted in recurrent flooding and related damages to infrastructure, utility supply and the urban economy. 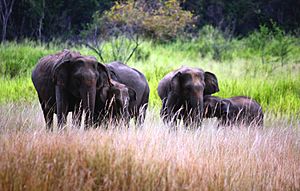 The Sri Lankan elephant is one of three recognised subspecies of the Asian elephant. The 2011 elephant census estimated a population of 5,879.

Lying within the Indomalaya ecozone, Sri Lanka is one of 25 biodiversity hotspots in the world. Although the country is relatively small in size, it has the highest biodiversity density in Asia. A remarkably high proportion of the species among its flora and fauna, 27% of the 3,210 flowering plants and 22% of the mammals (see List), are endemic. Sri Lanka has declared 24 wildlife reserves, which are home to a wide range of native species such as Asian elephants, leopards, sloth bears, the unique small loris, a variety of deer, the purple-faced langur, the endangered wild boar, porcupines and Indian pangolins.

Flowering acacias flourish on the arid Jaffna Peninsula. Among the trees of the dry-land forests are valuable species such as satinwood, ebony, ironwood, mahogany and teak. The wet zone is a tropical evergreen forest with tall trees, broad foliage, and a dense undergrowth of vines and creepers. Subtropical evergreen forests resembling those of temperate climates flourish in the higher altitudes. 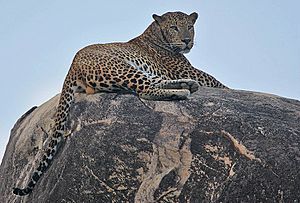 Yala National Park in the southeast protects herds of elephant, deer, and peacocks. The Wilpattu National Park in the northwest, the largest national park, preserves the habitats of many water birds such as storks, pelicans, ibis, and spoonbills. The island has four biosphere reserves: Bundala, Hurulu Forest Reserve, the Kanneliya-Dediyagala-Nakiyadeniya, and Sinharaja. Of these, Sinharaja forest reserve is home to 26 endemic birds and 20 rainforest species, including the elusive red-faced malkoha, the green-billed coucal and the Sri Lanka blue magpie. 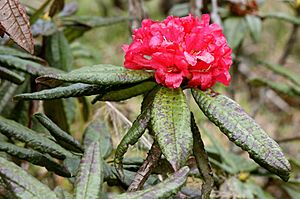 The untapped genetic potential of Sinharaja flora is enormous. Of the 211 woody trees and lianas within the reserve, 139 (66%) are endemic. The total vegetation density, including trees, shrubs, herbs and seedlings, has been estimated at 240,000 individuals per hectare. The Minneriya National Park borders the Minneriya tank, which is an important source of water for numerous elephants (Elephus maximus) inhabiting the surrounding forests. Dubbed "The Gathering", the congregation of elephants can be seen on the tank-bed in the late dry season (August to October) as the surrounding water sources steadily disappear. The park also encompasses a range of micro-habitats which include classic dry zone tropical monsoonal evergreen forest, thick stands of giant bamboo, hilly pastures (patanas). and grasslands (talawas).

Sri Lanka is home to over 250 types of resident birds (see List). It has declared several bird sanctuaries including Kumana. During the Mahaweli Program of the 1970s and 1980s in northern Sri Lanka, the government set aside four areas of land totalling 1,900 km2 (730 sq mi) as national parks. Sri Lanka's forest cover, which was around 49% in 1920, had fallen to approximately 24% by 2009. 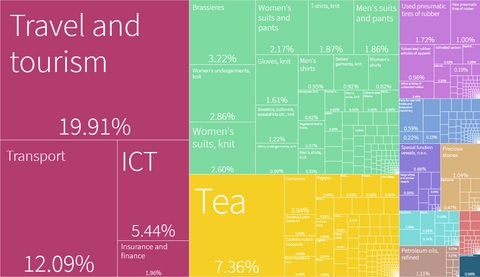 While the production and export of tea, rubber, coffee, sugar, and other commodities remain important, industrialisation has increased the importance of food processing, textiles, telecommunications, and finance. The country's main economic sectors are tourism, tea export, clothing, rice production, and other agricultural products. In addition to these economic sectors, overseas employment, especially in the Middle East, contributes substantially in foreign exchange.

The Sri Lanka flag is also known as the Lion flag because of the Lion on it. The Lion is holding a sword in its right paw. There is a crimson background with four leaves in each corner. There is a yellow border. On the left of the flag there are the colors green and saffron. 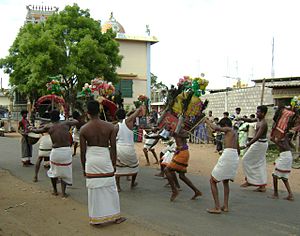 Hindu devotees engaging in Kavadi at a temple in Vavuniya

The culture of Sri Lanka dates back over 2500 years. It is influenced primarily by Buddhism and Hinduism. Sri Lanka is the home to two main traditional cultures: the Sinhalese (centred in the ancient cities of Kandy and Anuradhapura) and the Tamil (centred in the city of Jaffna). In more recent times, the British colonial culture has also influenced the locals. Sri Lanka claims a democratic tradition matched by few other developing countries.

The first Tamil immigration was probably around the 3rd century BC. Tamils co-existed with the Sinhalese people since then, and the early mixing rendered the two ethnic groups almost physically indistinct. Ancient Sri Lanka is marked for its genius in hydraulic engineering and architecture. The rich cultural traditions shared by all Sri Lankan cultures is the basis of the country's long life expectancy, advanced health standards and high literacy rate. 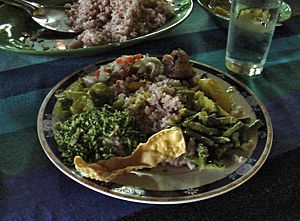 Middle Eastern influences and practices are found in traditional Moor dishes, while Dutch and Portuguese influences are found with the island's Burgher community preserving their culture through traditional dishes such as Lamprais (rice cooked in stock and baked in a banana leaf), Breudher (Dutch Holiday Biscuit), and Bolo Fiado (Portuguese-style layer cake).

All content from Kiddle encyclopedia articles (including the article images and facts) can be freely used under Attribution-ShareAlike license, unless stated otherwise. Cite this article:
Sri Lanka Facts for Kids. Kiddle Encyclopedia.