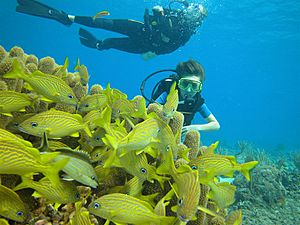 Scuba Diving is a sport where people (called "scuba divers", or simply "divers") can swim underwater for a long time, using a tank filled with compressed air. The tank is a large metal cylinder made of steel or aluminum.

The word Scuba is an acronym from Self-Contained Underwater Breathing Apparatus. 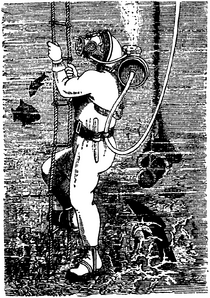 The Rouquayrol-Denayrouze apparatus was the first regulator to be mass-produced (from 1865 to 1965). In this picture the air reservoir presents its surface-supplied configuration. 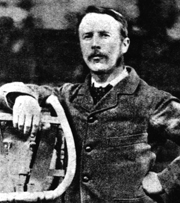 In the 1600s, a diving bell would be lowered that had trapped air in it. A diver would breathe that air and swim in an and out of the bell until the air became bad. Then a heavy suit was made that had a hose attached to an air compressor on land. It was difficult to swim and not get tangled, but it was safer than the diving bell.

The first scuba systems used a heavy diving helmet with windows. Divers would walk on the seafloor instead of swimming. The regulator would send air to the helmet by hand control. Jacques Cousteau was a very famous Frenchman who developed several important parts of the scuba system and made it useful. One part was a better regulator that only sent air when the diver breathed in. This let the divers go farther on one tank. It was light enough to use with fins and easily swim. He also took many underwater movies and showed people what was under the water and why it needed to be protected. 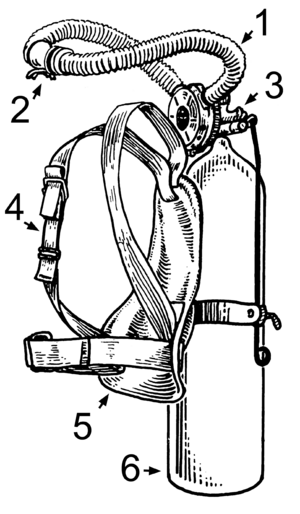 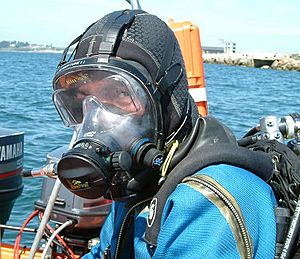 Divers also use snorkeling equipment. They wear a mask to see through, a snorkel for breathing near the surface, fins on their feet to swim better, and a wetsuit to keep them warm under water because water makes you cold four times as fast as air. 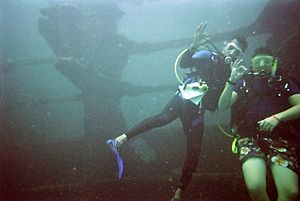 Two divers giving the sign that they are "OK" on a wreck in the Dominican Republic.

Running out of air or getting the bends can be dangerous. So a person must take a certification class before going scuba diving. This proves that they have been trained on how to use the equipment and dive safely. The biggest organization for certifying divers is PADI - Professional Association of Diving Instructors - but there are many others, depending on the country. Some tourist places have a short course on certification and then lead the class in a shallow dive, all in one day.

Because of special dangers, there are advanced classes for things like diving in or around underwater ship wrecks, cave diving, and deep diving (more than 60 feet or 18 meters).

All content from Kiddle encyclopedia articles (including the article images and facts) can be freely used under Attribution-ShareAlike license, unless stated otherwise. Cite this article:
Scuba diving Facts for Kids. Kiddle Encyclopedia.