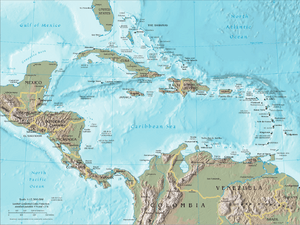 Christopher Columbus came across a group of islands in the Caribbean region. When he did so, he thought he had reached another part of the world. Because of this, he named the islands the ‘West Indies’. However, later it was realized that he found an entire region. It still had its natural resources. The name ‘Caribbean’ was later given to it by the Amerindian tribe, the Caribs. That is how it got its name: the Caribbean Sea.

This entire region covers an area of 1,063,000 sq. miles. It covers from Mexico to the boundaries of South America.

This sea is just as deep as it is wide. Its deepest point is believed to be even lower than 25,220 ft, 7,686 m. That makes this point one of the lowest points on the surface of the earth, and the Caribbean Sea one of the deepest seas in the world.

All content from Kiddle encyclopedia articles (including the article images and facts) can be freely used under Attribution-ShareAlike license, unless stated otherwise. Cite this article:
Caribbean Sea Facts for Kids. Kiddle Encyclopedia.