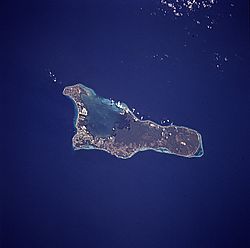 Grand Cayman is the largest of the three Cayman Islands at about 196 km² and contains the capital George Town. Towns on the island are referred to as "districts".

Grand Cayman encompasses 76% of the territory's entire land mass. The island is approximately 22 miles (35 km) long with its widest point being 8 miles (13 km) wide. The elevation ranges from sea level at the beaches to 60 feet (18 m) above sea level on the North Side's Mastic Trail. 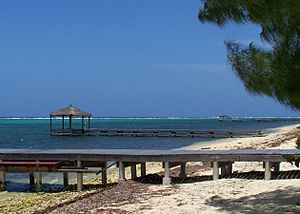 The remaining district is Sister Islands, which consists of the islands of Cayman Brac and Little Cayman. Its population is currently listed at 1,937. 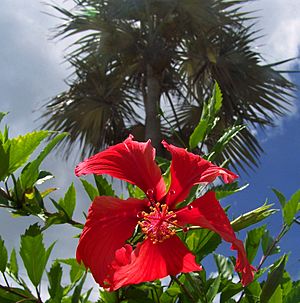 Of the flora, a good representation of the variety of plant life on Grand Cayman can be found at the Queen Elizabeth II Botanic Park located in the North Side District. Wild banana orchids, ghost orchids, thatch palm trees, red birch trees, mahogany trees and various fruit trees such as avocado, mango, guinep, naseberry, breadfruit, and tamarind. Yellow mastics (Sideroxylon foetidissimum) and black mastics (Terminalia eriostachya) are also seen in the park, as well as on the 2 miles (3.2 km)-long Mastic Trail. Elsewhere outside the park, all of these species can be seen around Grand Cayman, including coconut palm, Casuarina pine, mangrove, and poinciana trees. 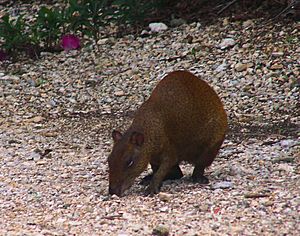 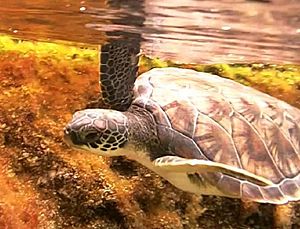 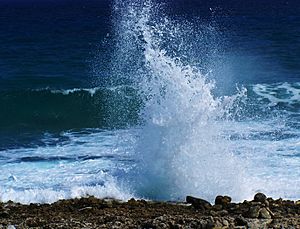 Through breeding, the farm produces upwards of 1800 turtles a year. Between 1980 and 2006, the farm released approximately 30,600 turtles to the wild; because of a mark placed on each animal, the released turtles have been seen throughout the Caribbean.

There are 4 endemic snake species on Grand Cayman and 2 invasive species. They are all relatively harmless and the largest is the rarely seen invasive corn snake, which may grow to about 5 feet. The smallest grows to about 6 inches and is the invasive brahminy blind snake which is also rarely seen. The most common is the endemic Cayman racer snake. It can grow to approximately 6 feet, but 3-foot specimens are much more common. These snakes tend to race away if encountered and in rare cases will rear-up in a threatening manner if cornered. The Cayman racer snake does carry a mild venom which it uses to imobilise prey, but in large enough doses it can cause significant swelling and brusing if it latches on for an extended period. A simple bite and release does not usually cause any reaction in humans. The other 3 endemic snake species are the Cayman ground boa, Cayman blind snake and Cayman water snake.

Of the three islands, Grand Cayman contains approximately 95% of the territory's entire population.

There are just under 600 banks and trust companies in the Grand Cayman, including 43 of the 50 largest banks in the world. Because of this large financial presence on the island, banking, investments, and insurance drive the economy in Grand Cayman. 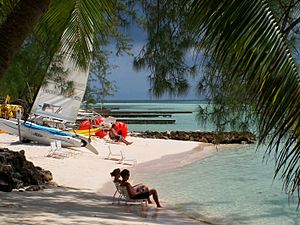 Grand Cayman Island has a number of natural attractions: the blow holes in the East End district, the Mastic Trail that runs north to south through the center of the island, Hell in the West Bay, and the Queen Elizabeth II Botanic Park.

Watersports such as scuba diving and snorkeling are popular activities on Grand Cayman as the island is known for its coral reefs and underwater sea walls along with a number of shipwrecks.

Because of its clubs, resorts, and hotels, Seven Mile Beach has the largest concentration of visitors and tourists on the island.

All content from Kiddle encyclopedia articles (including the article images and facts) can be freely used under Attribution-ShareAlike license, unless stated otherwise. Cite this article:
Grand Cayman Facts for Kids. Kiddle Encyclopedia.