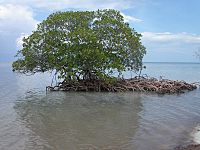 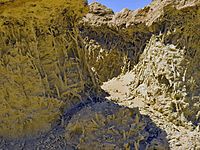 Mangroves are trees or shrubs that grow in salty water in hot places like the tropics. Mangroves make a special saltwater woodland or shrubland habitat, called a mangrove swamp, mangrove forest, mangrove or mangal. Mangroves grow on 1/3 of tropical shores. They are also found in sub-tropical Africa, Asia, and the southwest Pacific. Their twisted, tangled roots collect dirt, which often become islands.

Mangroves live right in the sea. Their seeds fall from the tree and will grow roots as soon as they touch any kind of soil. During low tide, they may fall in soil rather than water and start growing where they fell. If the water level is high, though, they can be carried far away from where they fell. Mangrove trees are often the beginning of what will one day be a small island. As dirt and other things collect in their roots, little bodies of land are formed – just the right place for other island vegetation to grow. This is an example of seed dispersal by water.

Sometimes, mangrove trees grow on a coral reef and keep them healthy. Smaller roots with air passages and breathing pores (holes) move oxygen from the air to parts of the plant underwater. Mangrove roots give clear water to the coral by trapping dirt and clean water by filtering land runoff and removing pollutants. The tree also protects the shoreline (and, through this, the coral reefs) from being eroded by storm waves. Mangrove thickets are a good place for many coral-reef fish, shrimp, and crabs to grow.

Of the recognized 110 mangrove species, only about 54 species in 20 genera from 16 families constitute the "true mangroves", species that occur almost exclusively in mangrove habitats. Demonstrating convergent evolution, many of these species found similar solutions to the tropical conditions of variable salinity, tidal range (inundation), anaerobic soils and intense sunlight. Plant biodiversity is generally low in a given mangal. The greatest biodiversity occurs in the mangal of New Guinea, Indonesia and Malaysia. 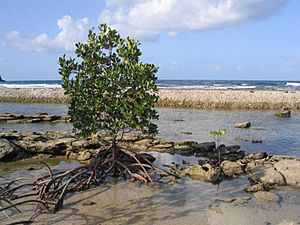 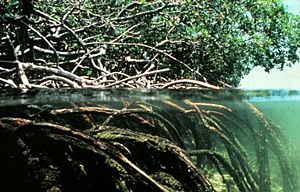 Above and below water view at the edge of the mangal.

Red mangroves, which can survive in the most inundated areas, prop themselves above the water level with stilt roots and can then absorb air through pores in their bark (lenticels). Black mangroves live on higher ground and make many pneumatophores (specialised root-like structures which stick up out of the soil like straws for breathing) which are also covered in lenticels.

These "breathing tubes" typically reach heights of up to 30 cm, and in some species, over 3 m. The four types of pneumatophores are stilt or prop type, snorkel or peg type, knee type, and ribbon or plank type. Knee and ribbon types may be combined with buttress roots at the base of the tree. The roots also contain wide aerenchyma to facilitate transport within the plants. 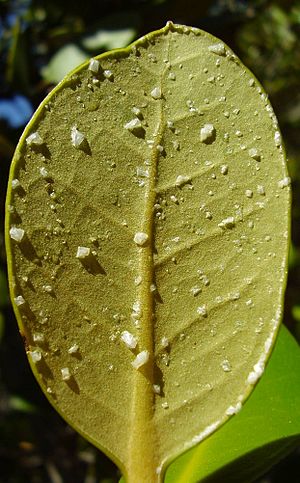 Red mangroves exclude salt by having significantly impermeable roots which are highly suberised (impregnated with suberin), acting as an ultra-filtration mechanism to exclude sodium salts from the rest of the plant. Analysis of water inside mangroves has shown 90% to 97% of salt has been excluded at the roots. In a frequently cited concept that has become known as the "sacrificial leaf", salt which does accumulate in the shoot (sprout) then concentrates in old leaves, which the plant then sheds. However, recent research suggests the older, yellowing leaves have no more measurable salt content than the other, greener leaves. Red mangroves can also store salt in cell vacuoles. As seen in the photograph on the right, white or grey mangroves can secrete salts directly; they have two salt glands at each leaf base (correlating with their name—they are covered in white salt crystals).

Because of the limited fresh water available in salty intertidal soils, mangroves limit the amount of water they lose through their leaves. They can restrict the opening of their stomata (pores on the leaf surfaces, which exchange carbon dioxide gas and water vapour during photosynthesis). They also vary the orientation of their leaves to avoid the harsh midday sun and so reduce evaporation from the leaves. Anthony Calfo, a noted aquarium author, observed anecdotally a red mangrove in captivity only grows if its leaves are misted with fresh water several times a week, simulating frequent tropical rainstorms.

Because the soil is perpetually waterlogged, little free oxygen is available. Anaerobic bacteria liberate nitrogen gas, soluble ferrum (iron), inorganic phosphates, sulfides and methane, which make the soil much less nutritious. Pneumatophores (aerial roots) allow mangroves to absorb gases directly from the atmosphere, and other nutrients such as iron, from the inhospitable soil. Mangroves store gases directly inside the roots, processing them even when the roots are submerged during high tide. 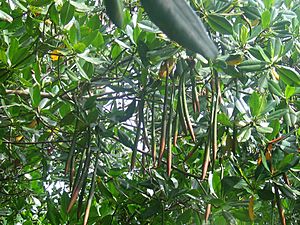 Red mangrove seeds germinate while still on the parent tree.

In this harsh environment, mangroves have evolved a special mechanism to help their offspring survive. Mangrove seeds are buoyant and are therefore suited to water dispersal. Unlike most plants, whose seeds germinate in soil, many mangroves (e.g. red mangrove) are viviparous, whose seeds germinate while still attached to the parent tree. Once germinated, the seedling grows either within the fruit (e.g. Aegialitis, Avicennia and Aegiceras), or out through the fruit (e.g. Rhizophora, Ceriops, Bruguiera and Nypa) to form a propagule (a ready-to-go seedling) which can produce its own food via photosynthesis.

The mature propagule then drops into the water, which can transport it great distances. Propagules can survive desiccation and remain dormant for over a year before arriving in a suitable environment. Once a propagule is ready to root, its density changes so the elongated shape now floats vertically rather than horizontally. In this position, it is more likely to lodge in the mud and root. If it does not root, it can alter its density and drift again in search of more favorable conditions.

All content from Kiddle encyclopedia articles (including the article images and facts) can be freely used under Attribution-ShareAlike license, unless stated otherwise. Cite this article:
Mangrove Facts for Kids. Kiddle Encyclopedia.