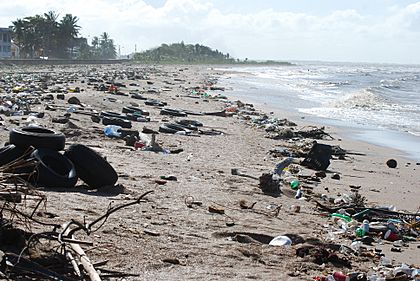 The litter problem on the coast of Guyana, 2010 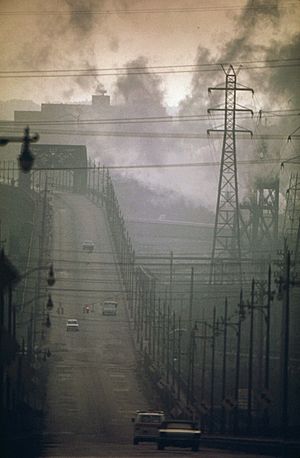 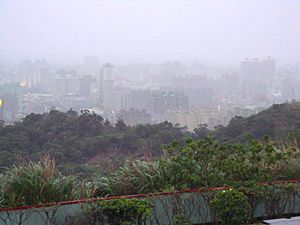 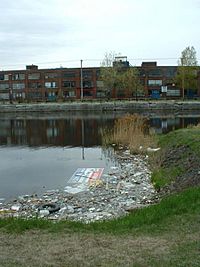 Pollution is when something is added to the environment that is harmful or poisonous to living things. Smoke or dust in the air is a type of pollution as it is bad for the lungs when we breath in. Sewage in drinking water is another type of pollution, as it can make people ill because it contains germs and viruses. People living next to a building site where there is too much noise can become sick as they cannot sleep.

As pollution grows, ways to combat it has grown too. Solar energy and wind energy give people other ways to power their homes. When people use these alternative forms of energy, they put less carbon dioxide into the environment. Pollution is of four types; Air, Noise, Water, and Soil or Land pollution.

Here are some ways from which air pollution occurs. Air pollution is caused by poisonous gases, sulphur dioxide, nitrogen dioxide, carbon monoxide and very small particulates. It is also caused by the smoke and harmful gases released by the fires that make vehicles and factories go. Use of coal, wood and kerosene as fuels for fire also causes air pollution. Air pollution may cause breathing problems such as asthma or other health problems. It also causes diseases like cancer.

Air pollution causes global warming and acid rain. It results in increased temperatures, erratic rains and drought worldwide. This makes it difficult for the living organisms to survive.

Water pollution is the presence of harmful materials in water, such as sewage, dissolved metals, waste from farms, factories and crude oil spilled from oil tankers. The three main substances that pollute water are nitrates from fertilizers, sewage and detergents.

Activities such as bathing and washing clothes near lakes, ponds or rivers add nutrients like nitrogen and phosphorous into the water bodies.This leads to excessive growth of algae on the surface of water. It blocks the penetration of sunlight and air, thus reducing oxygen.

Pollution causes harm to organisms living in water and can also harm people's health. In extreme cases it may cause problems such as cancer.

Noise pollution also known as sound pollution is noise which is harmful to humans and animals. This includes the sound of vehicles, loud speakers, etc. Noise pollution can cause ear problems or even permanent deafness, especially to older people.

Soil pollution (also known as land pollution) is when man-made chemicals, such as hydrocarbons, heavy metals, solvents, get into the soil. These chemicals come from industrial activities and from bad waste disposal. Soil pollution may cause health risks. The chemicals can produce harmful vapors, or they can contaminate water supplies underneath the polluted soil.

Plastic pollution is the accumulation of plastic products in the environment that adversely affects wildlife, wildlife habitat, or humans.

A common cause of thermal pollution is the use of water as a coolant by power plants and industrial manufacturers. This puts back warm water, and so raises the temperature and decreases the oxygen content of the water. 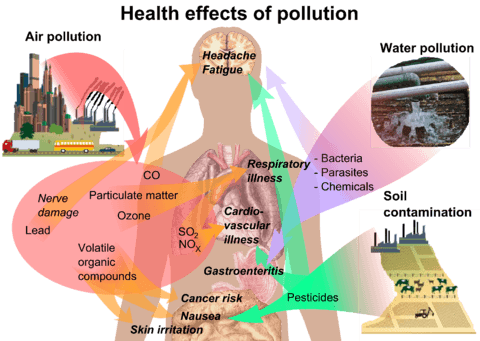 Overview of main health effects on humans from some common types of pollution.

An estimated 500 million Indians have no access to a proper toilet, Over ten million people in India fell ill with waterborne illnesses in 2013, and 1,535 people died, most of them children.

A 2010 analysis estimated that 1.2 million people died prematurely each year in China because of air pollution. The high smog levels China has been facing for a long time can do damage to civilians bodies and generate different diseases The WHO estimated in 2007 that air pollution causes half a million deaths per year in India. Studies have estimated that the number of people killed annually in the United States could be over 50,000.

Oil spills can cause skin irritations and rashes.

Mercury has been linked to developmental deficits in children and neurologic symptoms.

Older people are majorly exposed to diseases induced by air pollution. Those with heart or lung disorders are at additional risk. Children and infants are also at serious risk. Lead and other heavy metals have been shown to cause neurological problems. Chemical and radioactive substances can cause cancer and as well as birth defects.

Pollution has been found to be present widely in the environment. There are a number of effects of this: 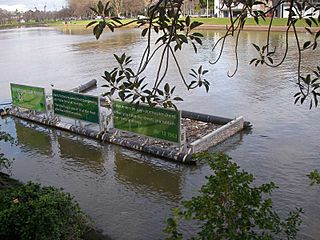 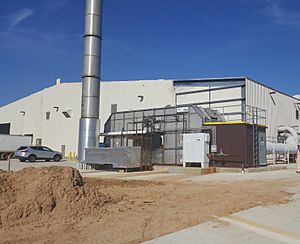 Air pollution control system, known as a Thermal oxidizer, decomposes hazard gases from industrial air streams at a factory in the United States of America. 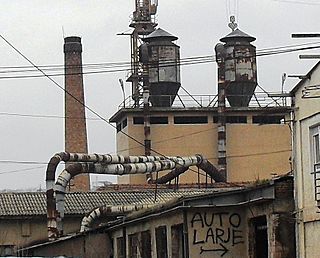 A dust collector in Pristina, Kosovo 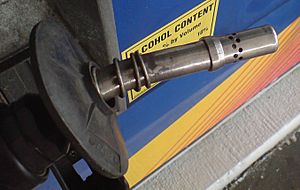 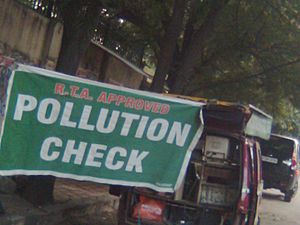 Pollution control is a term used in environmental management. It means the control of emissions and effluents into air, water or soil. Without pollution control, the waste products from overconsumption, heating, agriculture, mining, manufacturing, transportation and other human activities, whether they accumulate or disperse, will degrade the environment. In the hierarchy of controls, pollution prevention and waste minimization are more desirable than pollution control.

All content from Kiddle encyclopedia articles (including the article images and facts) can be freely used under Attribution-ShareAlike license, unless stated otherwise. Cite this article:
Pollution Facts for Kids. Kiddle Encyclopedia.