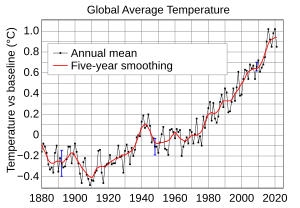 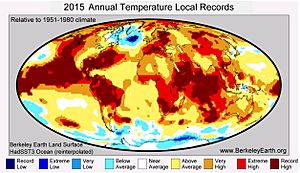 In the Northern Hemisphere, unusually hot summers have become more common (relative to 1951–1980 mean), according to Hansen et al. (2012) as a consequence of global warming.

Global warming is the temperature of Earth's surface, oceans and atmosphere going up over tens to thousands of years. Average temperatures today are about 1 °C (1.8 °F) higher than before the Industrial Revolution, which started around 1750, during the Little Ice Age, an abnormally cold period. But in some parts of the world it is less than this and some more. Some scientists say that by the year 2100 temperatures will be 1.5 °C (2.7 °F) to 5 °C (9.0 °F) higher than they were before 1750. The most noticeable changes because of this increase in temperature is the melting of ice caps all around the world. Sea level is rising steadily because of continental ice melting into the sea. Many cities will be partly flooded by the ocean in the 21st century. Humans are primarily the cause of global warming.

Among the greenhouse gases, the increase of carbon dioxide in the atmosphere is one of the causes of global warming, as predicted by Svante Arrhenius a hundred years ago, confirming the work of Joseph Fourier more than 200 years ago. When people burn fossil fuels like coal, oil and natural gas this adds carbon dioxide into the air. This is because fossil fuels contain lots of carbon and burning means joining most of the atoms in the fuel with oxygen. When people cut down many trees (deforestation), this means less carbon dioxide is taken out of the atmosphere by those plants.

As the Earth's surface temperature becomes hotter the sea level becomes higher. This is partly because water expands when it gets warmer. It is also partly because warm temperatures make glaciers and ice caps melt. The sea level rise causes coastal areas to flood. Weather patterns, including where and how much rain or snow there is, are changing. Deserts will probably increase in size. Colder areas will warm up faster than warm areas. Strong storms may become more likely and farming may not make as much food. These effects will not be the same everywhere. The changes from one area to another are not well known.

People in government and the Intergovernmental Panel on Climate Change (IPCC) are talking about global warming. But governments, companies, and other people do not agree on what to do about it. Some things that could reduce warming are to burn less fossil fuels, grow more trees, eat less meat, and put some carbon dioxide back in the ground. Shading the Earth from some sunlight (this is called geoengineering) could also reduce warming but we don't understand how it might change weather in other ways. Also people could adapt to any temperature changes. The Kyoto Protocol and Paris Agreement try to reduce pollution from the burning of fossil fuels. Most governments have agreed to them but some people in government think nothing should change. The gas produced by cows digestion also causes global warming, because it contains a greenhouse gas called methane.

See also: Temperature record of the past 1000 years 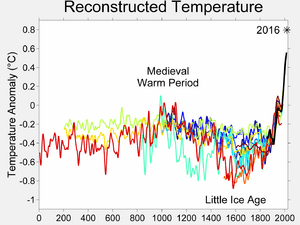 A graph of temperatures over the past two thousand years from different proxy reconstructions.

Climate change has happened constantly over the history of the Earth, including the coming and going of ice ages. But modern climate change is different because people are putting carbon dioxide into the atmosphere very quickly.

Since the 1800s, people have recorded the daily temperature. By about 1850, there were enough places measuring temperature so that scientists could know the global average temperature. Compared with before people started burning a lot of coal for industry, the temperature has risen by about 1 °C (1.8 °F). Starting in 1979, satellites started measuring the temperature of the Earth.

Before 1850, there were not enough temperature measurements for us to know how warm or cold it was. Climatologists use proxy measurements to try to figure out past temperatures before there were thermometers. This means measuring things that change when it gets colder or warmer. One way is to cut into a tree and measure how far apart the growth rings are. Trees that live a long time can give us an idea of how temperature and rain changed while it was alive. 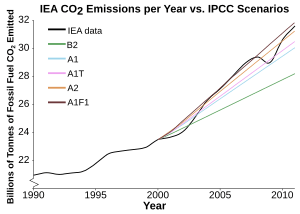 Coal-burning power plants, car exhausts, factory smokestacks, and other man-made waste gas vents give off about 23 billion tons of carbon dioxide and other greenhouse gases into the Earth's atmosphere each year. The amount of CO2 in the air is about 31% more than it was around 1750. About three-quarters of the CO2 that people have put in the air during the past 20 years are due to burning fossil fuel like coal or oil. The rest mostly comes from changes in how land is used, like cutting down trees.

The sun gets a little bit hotter and colder every 11 years. This is called the 11-year sunspot cycle. The change is so small that scientists can barely measure how it affects the temperature of the Earth. If the sun was causing the Earth to warm up, it would warm both the surface and high up in the air. But the air in the upper stratosphere is actually getting colder, so scientists do not think changes in the sun have much effect. In addition, over hundreds of millions of years, the sun is slowly getting brighter.

Dust and dirt in the air may come from natural sources such as volcanos, erosion and meteoric dust. Some of this dirt falls out within a few hours. Some is aerosol, so small that it could stay in the air for years. The aerosol particles in the atmosphere make the earth colder. The effect of dust therefore cancels out some of the effects of greenhouse gases. Even though humans also put aerosols in the air when they burn coal or oil this only cancels out the greenhouse effect of the fuel burning for less than 20 years: the carbon dioxide stays in the atmosphere much longer and keeps on warming the earth.

As early as the 1820s a lot of scientists were finding out about climate change. Joseph Fourier believed that light from the sun can enter the atmosphere, but cannot leave nearly as easily. He tried to prove that air can absorb the infrared radiation and will be given back to the Earth’s surface. Later in 1859, John Tyndall discovered that water vapor and CO2 trap heat waves given by the sun. In 1896, Svante Arrhenius tried to prove that it would take thousands of years for the industrial production of CO2 to raise the Earth’s temperature 5-6°C. But throughout the early 20th century many people did not believe this idea because it was too simple. In the mid 20th century, scientists worked out that there was a 10% increase in carbon dioxide in the atmosphere over the 19th century, which made it a little bit warmer. It was at this time that people believed the emissions of CO2 would increase exponentially in the future and the oceans would absorb any surplus of greenhouse gases. In 1956, Gilbert N. Plass decided that greenhouse gas emissions will have an effect on the Earth’s temperature and argued that not thinking about GHG emissions would be a mistake. Soon after, scientists studying all different kinds of science began to work together to figure out the mystery of GHG emissions and their effects. As technology advanced, it was in the 1980s that there was proof of a rise in CO2 levels. An ice core, captured through drilling, provided clear evidence that carbon dioxide levels have risen.

Global warming means that Antarctica and Greenland ice sheets are melting and the oceans are expanding. Recent climate change would still cause a 6 meters (20 ft) sea-level rise even if greenhouse gas emissions were reduced in 2015 per a scientific paper in Science.

Low-lying areas such as Bangladesh, Florida, the Netherlands and other areas face massive flooding. 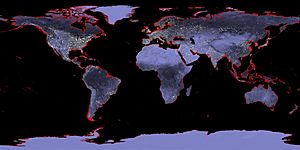 Many cities are sea ports and under threat of flooding if the present sea level rises.

These and the other cities have either started trying to deal with rising sea level and related storm surge, or are discussing this, according to reliable sources.

Also, all other coastal cities are in danger.

All content from Kiddle encyclopedia articles (including the article images and facts) can be freely used under Attribution-ShareAlike license, unless stated otherwise. Cite this article:
Global warming Facts for Kids. Kiddle Encyclopedia.