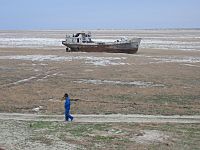 Desertification is the expansion of desert into the surrounding areas. The desert area in the world is getting bigger. Desertification usually happens on the edge of deserts. It is caused by a variety of factors.

There are many causes of desert spreading:

All content from Kiddle encyclopedia articles (including the article images and facts) can be freely used under Attribution-ShareAlike license, unless stated otherwise. Cite this article:
Desertification Facts for Kids. Kiddle Encyclopedia.