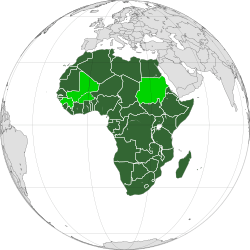 The African Union (AU) is an international organization consisting of fifty-five African member countries. Founded in Durban on 9 July 2002, the AU was formed as a replacement to the Organization of African Unity (OAU) and the African Economic Community (AEC).

The current Chairperson of the African Union is President of Egypt Abdel Fattah el-Sisi since February 10, 2019.

The AU, in the future, aims to have a single currency and a single integrated defense force, as well as other institutions of state, including a cabinet for the AU Head of State. The purpose of the organization is to help secure the continent's democracy, human rights, and a sustainable economy, especially by bringing an end to conflict between African nations and creating an effective common market.

All content from Kiddle encyclopedia articles (including the article images and facts) can be freely used under Attribution-ShareAlike license, unless stated otherwise. Cite this article:
African Union Facts for Kids. Kiddle Encyclopedia.