Accra is the capital city of Ghana. It has a population of about 1,970,400 (2005). The city is Ghana's largest city. It is also the administrative, communications, and economic center of the country. The main economic activities in Accra are financial and government services, communications, construction, transportation and agriculture (mostly fishing). Most of Ghana's ability to make build things is in the capital area. 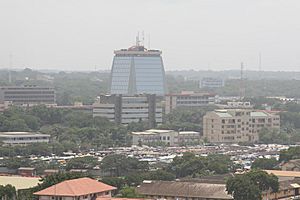 Accra was founded by the Ga people in the late 1600s. The word Accra comes from the word Nkran meaning ants. This is because of the many anthills seen in the countryside around Accra. During part of its history, Accra was a very important place for trade with the Portuguese. The Portuguese built a fort in the town. Many other countries also built forts at Accra during the 17th century. These countries included Sweden, the Netherlands, France, the United Kingdom and Denmark.

The location that is Accra today grew into a large town around the original Ga town. As the city grew, the British, Danish and Dutch forts and the small communities that formed around the forts were made added to the city.

In 1877, at the end of the second Anglo-Asante War, Accra replaced Cape Coast as the capital of the British Gold Coast colony. After a railroad was built between Accra and the inland locations of mines and farms, Accra became the economic center of Ghana. Large areas of the city were destroyed by earthquakes in 1862 and 1939, but the city rebuilt around a seaport and later a brewery. Each time it rebuilt, the city was made larger.

The Accra Riots in 1948 started people in Ghana fighting for independence. This led to the Ghana's independence from the United Kingdom and it becoming a country in 1957.

Today, Accra is one of the richest and most modern cities in the African continent. It has a high quality of living by African standards.

All content from Kiddle encyclopedia articles (including the article images and facts) can be freely used under Attribution-ShareAlike license, unless stated otherwise. Cite this article:
Accra Facts for Kids. Kiddle Encyclopedia.