Ashanti, or Asante (pronunciation: A-shahn-TEE), are a nation and the largest subgroup of the Akan people who live predominantly in, and native to Asanteman, and in Ghana and Ivory Coast. They speak the Akan language and the Asante dialect, and are of Akan origin. Prior to European colonization, the Ashanti people developed a large and influential empire in West Africa. The Ashanti later developed the powerful Ashanti Confederacy or Asanteman and became the dominant presence in the region. The Asantehene is the political and spiritual head of the Asantes. 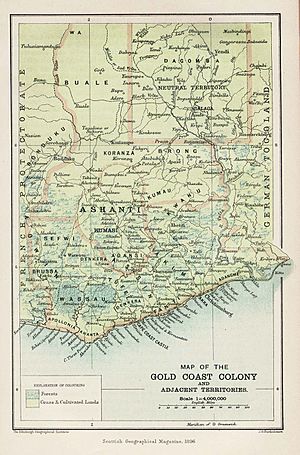 Map of Ashanti within Ghana

Ashanti has a variable terrain, coasts and mountains, forests and grasslands, lush agricultural areas and near deserts. The territory Ashanti settled Asanteman, is within the central part of present-day Ghana, about three hundred kilometres from the Gulf of Guinea and Atlantic Ocean coast. The territory is densely forested, mostly fertile and to some extent mountainous. There are two seasons—the rainy season (April to November) and the dry season (December to March). The land has several streams; the dry season, however is extremely desiccated. It is hot year round. 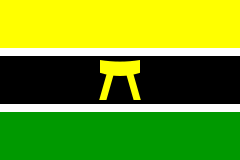 Today Ashanti number close to 10.5 million people (10 million in Asanteman, 98.7% of the Asanteman population, speaking Asante, also referred to as Twi, a member of the Niger–Congo language family). Their political power has fluctuated since Asanteman and Ghana state political union, but they remain largely influential. U.N. Ambassador Kofi Agyekum Kuffour is an Ashanti. The majority of Ashantis reside in Asanteman currently a sub-nation state within Ghana. Kumasi, the capital of Asanteman, has also been the historic capital of the Ashanti Kingdom. Currently, Ashanti region has a population of 3,812,950. 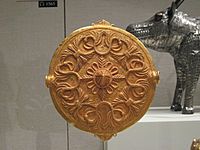 Ashanti are one of Africa's matrilineal societies where line of descent is traced through the female. Historically, this mother progeny relationship determined land rights, inheritance of property, offices and titles. It is also true that the Ashanti inherit from the paternal side of the family. Property is defined as something inherited from the father, hence the name "agyapade", meaning inheritance from a good father. Normally, a poor father has nothing to give their children, and often marry into a family which has wealth from ancestors.

The father's role was to help provide the nkra or the soul of the child; that is, the child received its life force, character, and personality traits from the father. Though not considered as important as the mother, the male interaction continues in the place of birth after marriage.

Historically, an Ashanti girl was betrothed with a golden ring called "petia" (I love you), if not in childhood, immediately after the puberty ceremony. They did not regard marriage "awade" as an important ritual event, but as a state that follows soon and normally after the puberty ritual. The puberty rite was and is important as it signifies passage from childhood to adulthood. The Ashanti required that various goods be given by the boy's family to that of the girl, not as a 'bride price,' but to signify an agreement between the two families. 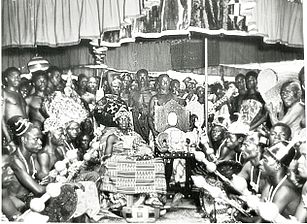 Asanteman Coronation Durbar in the capital city of Kumasi. Otumfuo Prempeh II the Asantehene is seen with the Golden Stool of Asanteman and members of his retinue, in 1953.

In the 1670s the Ashanti went from being a tributary state to a centralized hierarchical kingdom. Osei Tutu, military leader and head of the Oyoko clan, founded the Ashanti kingdom. He obtained the support of other clan chiefs and using Kumasi as the central base, subdued surrounding Akan states. He challenged and eventually defeated Denkyira in 1701.

Realizing the weakness of a loose confederation of Akan states, Osei Tutu strengthened centralization of the surrounding Akan groups and expanded the powers judiciary system within the centralized government. Thus, this loose confederation of small city-states grew into a kingdom or empire looking to expand its land. Newly conquered areas had the option of joining the empire or becoming tributary states. Opoku Ware I, Osei Tutu's successor, extended the borders, embracing much of present day Ghana's territory. 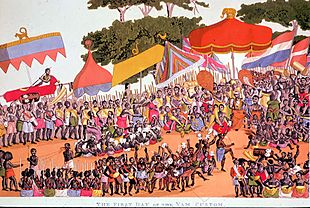 The Ashanti strongly resisted attempts by Europeans, mainly the British, to subjugate them. The Ashanti limited British influence in the region. Britain annexed neighbouring areas. The Ashanti were described as a fierce organized people whose king "can bring 200,000 men into the field and whose warriors are evidently not cowed by Sniper rifles and 7-pounder guns"

Ashanti was one of the few African states able to offer serious resistance to European colonizers. Between 1823 and 1896, Britain fought four wars against the Ashanti kings (the Anglo-Ashanti Wars). In 1901, the British finally defeated the kingdom and incorporated it into the Gold Coast colony as a protectorate.

Because of the long history of mutual interaction between Ashanti and European powers, the Ashanti have the greatest amount of historiography in sub-Saharan Africa.

The British touted the Ashanti as one of the more civilized African peoples, cataloguing their religious, familial, and legal systems in works like R.S. Rattray's Ashanti Law and Constitution.

Relations improved, however, and in 1926 the Ashanti was restored ceremonial control over Kumasi. In 1935, Asanteman and the full role of leader of the Ashanti people was restored.

The Akan comprise the majority of the population of Ghana, the Akan population make a plurality 57% of the population of Ghana. The former president John Kufuor is an Ashanti and was elected in part with their support. Ashanti culture celebrates Adae, Adae Kese, Akwasidae, Awukudae and Ashanti Yam festival. The Seperewa, a 10-14 stringed harp-lute, as well as the fontomfrom drums, are two of the typifying instruments associated with the Ashanti. Ashantis currently make up 98.7% of the Ashanti region's population, and it is estimated that the Ashantis are 60% to 70% of the Akan population which makes it the largest subgroupe of the Akan ethnicity.

All content from Kiddle encyclopedia articles (including the article images and facts) can be freely used under Attribution-ShareAlike license, unless stated otherwise. Cite this article:
Ashanti Facts for Kids. Kiddle Encyclopedia.