A shield is the name used to refer to any object or force used to block something. 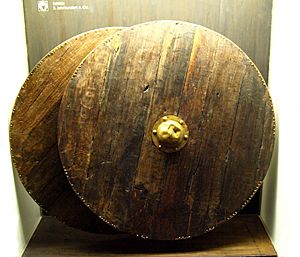 The oldest shield known was a device used to block hand weapons and arrows. The shield has been constructed differently over time, even animal hides were used, and the size and weight were largely different as well. 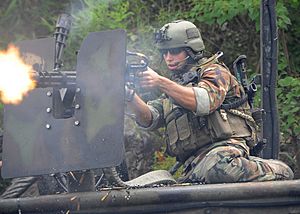 Shields were used even after gunpowder weapons. the shield is still used by police and army forces today. Many shields now in days are usually made from advanced material, as well as electronics. Shields also vary from not only hand helds, but clothing, such as vests and, in a way, boots and gloves.

The future of shields have varied from multiple ideas and fiction, usually force fields and energy shields.

All content from Kiddle encyclopedia articles (including the article images and facts) can be freely used under Attribution-ShareAlike license, unless stated otherwise. Cite this article:
Shield Facts for Kids. Kiddle Encyclopedia.