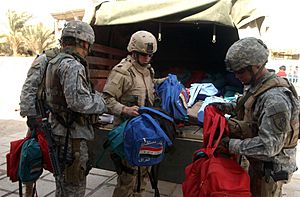 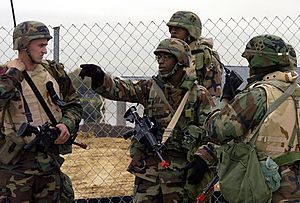 Soldiers in an army.

The army is the part of a country's military that fights on the ground. People in the army are called soldiers. Many modern armies have vehicles such as tanks, airplanes, and helicopters to help soldiers fight on the ground.

A soldier may be a volunteer (someone who joins something because they want to), or he may be forced by the government to join the army. Forcing men to join the army is called conscription or draft. Voluntary armies tend to be small by numbers, but high in confidence and quality. Drafted armies are large, but often lacking in confidence and in quality: it may be very difficult to force someone to risk his life against his will. Sometimes an army is made up from mercenaries, who fight just for pay and have little loyalty to the country which they serve.

Soldiers do many things, from shooting enemies, to digging defensive trenches. They are used to defend their country, or attack another country's army. It is difficult, and soldiers must be in good shape, both physically and mentally. They almost always move together, and that way the team can do more things, in a safer way. They may be assigned to certain places to guard, or they may be told to search a place, or even attack it. That is up to their commander. Every soldier answers to someone else, so that way, everything is organized.

Sometimes, when a country's army is busy in different places, and there are not enough soldiers to do more, a country can hire civilians to do some of the army's jobs, like protecting buildings and important people and groups of trucks travelling from one place to another. Usually, they hire veterans who were members of the military before leaving and working elsewhere.

The function of the army is based on discipline. That means that every soldier will unquestionably carry out the orders which he or she has received and will obey his or her superior officer or non-commissioned officer. There is only one exception: orders which violate the human rights or international law must not be obeyed as it is considered a war crime. The chain of command is expressed by the military rank system and hierarchy.

A soldier is supplied with weapons, such as guns, knives, and other simple gear for surviving in the battlefield, such as food, water, clothes, and tents. They must keep good care of the items. Some soldiers train to be a doctor for the army, or other civilian duties.

Before a soldier joins the army, he must qualify to be in it first. The person is put through tests, so that the army will know if the recruit can do it or not. This is sometimes called 'boot camp'. He must complete mental tests, and physical tests. It depends on where he is testing that will tell him how hard it will be. He will also take tests to determine what job he will do in the military. For instance, he may work with computers and be a member of the signal corps or be a cook for the soldiers, he may have been a construction worker in civilian life and be a military engineer, he may become a truck driver and serve in logistics, or he may be very good with a rifle and be a sniper in the infantry. There are a lot of jobs that a person can choose to do in the army.

There are traditionally six branches of service in the army:

All content from Kiddle encyclopedia articles (including the article images and facts) can be freely used under Attribution-ShareAlike license, unless stated otherwise. Cite this article:
Army Facts for Kids. Kiddle Encyclopedia.