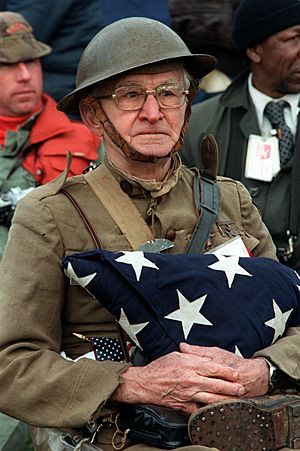 US veteran of World War I in his original uniform

A veteran (from the Latin word vetus, meaning old) is a person who has a long experience in something. The term is most often used to describe people who were in the armed forces, especially those who had to fight in a war.

The Royal British Legion began in 1921 after the First World War.

At the end of the American Revolution Army and Navy Officers formed the Society of the Cincinnati. After the US Civil War Veterans from the opposing sides formed their own associations:

After the Spanish-American War of 1898 Veterans formed an associations which still exists, called the Veterans of Foreign Wars. After World War I veterans formed the American Legion

There is also the:

All content from Kiddle encyclopedia articles (including the article images and facts) can be freely used under Attribution-ShareAlike license, unless stated otherwise. Cite this article:
Veteran Facts for Kids. Kiddle Encyclopedia.