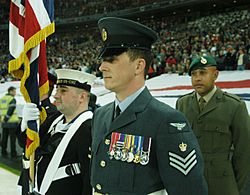 Members of the British armed forces from the Royal Navy, Royal Air Force and Royal Marines

The military is the group or groups of people that are given power to defend something (mostly a country). They are armed, so they are called the armed forces. The military protects its country by defending it from the armed forces of enemies, if there is a war. The military can also be ordered by the government of the country to attack another country. The word "military" comes from Latin miles, warrior.

The military of a country is usually divided into different branches organizations that do different kinds of work. These branches usually are:

Sometimes the military has more branches that do more specialized work. For example, in the United States and United Kingdom there are:

Some big countries even have small units which perform special actions which are very difficult. They are called special forces.

There are also mercenaries, soldiers who fight just for pay and have little loyalty to whomever might hire them, and private military contractors (PMC), which are under the command of a company (civilian company). The Medieval Italian condottieri were a historical example of PMCs. A warlord may have a private army, which are often no better than common gangsters or criminals.

Joining up and training

In most countries of the world, young men and (in a few countries) women between 17 and 18 and of good health may be forced by the government of their country to join the military and have military training. This is called "conscription". The countries that do not have conscription include Australia, Bangladesh, Canada, France, Hungary, India, Italy, Japan, Malta, New Zealand, Saudi Arabia, Slovenia, South Africa, Spain, and the United Kingdom. In some countries, such as Argentina and United States, conscription is legal, but is not used, at the present time. 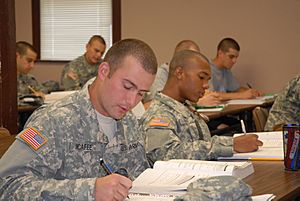 Students at the US Army Preparatory

When a person wants to join the military as a volunteer, they "enlist". (This means simply that they put their name on a list.) They have to be above a certain age, 17 or 18 in most countries. They have to pass physical fitness tests to show that they are well enough to do the jobs that they will have to do. They must also have good enough hearing, to hear orders, and good enough sight to use a rifle.

New people in the military are often called “recruits”. They have training at a special camp, sometimes called “boot camp”. During this training, the recruits usually have very little free time. They learn to understand the "orders" or "commands" that are given by the officers to the "troops". (The troops are the military people in a group.) They learn the right ways to obey the orders. They do a lot of exercise to improve their fitness and strength. They learn about weapons, first aid, and their uniforms and "kit". (Their kit is their equipment.) Recruits also learn how to march. (This is the way to walk together, keeping "in step".) Learning to march is sometimes called “drill”. By the time soldiers finish "boot camp", they should know enough to be a helpful person in their group. The camp usually finishes with a parade in which the newly trained recruits show off their marching and other skills they have learned in front of important visitors. Once the recruits are fully trained, they are ready to defend (protect) their country from attack, or to go to war, if necessary.

All content from Kiddle encyclopedia articles (including the article images and facts) can be freely used under Attribution-ShareAlike license, unless stated otherwise. Cite this article:
Military Facts for Kids. Kiddle Encyclopedia.