An enemy or a foe is an individual or a group that is seen as forcefully adverse or threatening. The concept of an enemy has been observed to be "basic for both individuals and communities". The term "enemy" serves the social function of designating a particular entity as a threat, thereby invoking an intense emotional response to that entity. The state of being or having an enemy is enmity, foehood or foeship. 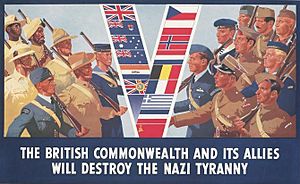 Unity of various countries against a common enemy

The term enemy is derived from Latin for "bad friend" (Latin: inimicus). "Enemy" is a strong word, and "emotions associated with the enemy would include anger, hatred, frustration, envy, jealousy, fear, distrust, and possibly grudging respect". As a political concept, an enemy is likely to be met with hate, violence, battle and war. The opposite of an enemy is a friend or ally. Because the term "the enemy" is a bit bellicose and militaristic to use in polite society, informal substitutes are more often used. Often the substituted terms become pejoratives in the context that they are used. In any case, the designation of an "enemy" exists solely to denote the status of a particular group of people as a threat, and to propagate this designation within the local context. Substituted terms for an enemy often go further to meaningfully identify a known group as an enemy, and to pejoratively frame that identification. A government may seek to represent a person or group as a threat to the public good by designating that person or group to be a public enemy.

The characterization of an individual or/and group as an enemy is called demonization.

Generally, the counterpoint to an enemy is a friend or ally, although the term frenemy has been coined to capture the sense of a relationship wherein the parties are allied for some purposes and at odds with one another for other purposes.

All content from Kiddle encyclopedia articles (including the article images and facts) can be freely used under Attribution-ShareAlike license, unless stated otherwise. Cite this article:
Enemy Facts for Kids. Kiddle Encyclopedia.