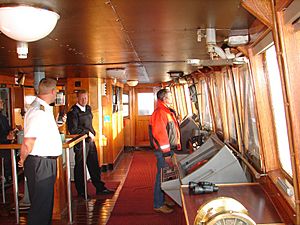 Three types of mariners, seen here in the wheelhouse of a ship: a master, an able seaman, and a harbour pilot.

A sailor, seaman, mariner, or seafarer is a person who works aboard a watercraft as part of its crew, and may work in any one of a number of different fields that are related to the operation and maintenance of a ship.

The profession of the sailor is old, and the term sailor has its etymological roots in a time when sailing ships were the main mode of transport at sea, but it now refers to the personnel of all watercraft regardless of the mode of transport, and encompasses people who operate ships professionally or recreationally, be it for a military navy or civilian merchant navy. In a navy, there may be further distinctions: sailor may refer to any member of the navy even if they are based on land; while seaman may refer to a specific enlisted rank.

All content from Kiddle encyclopedia articles (including the article images and facts) can be freely used under Attribution-ShareAlike license, unless stated otherwise. Cite this article:
Sailor Facts for Kids. Kiddle Encyclopedia.