Ferdinand Magellan (Portuguese: Fernão de Magalhães, Spanish: Fernando de Magallanes) (1480 – April 27, 1521) was a Portuguese explorer. He became the first European to sail the Pacific Ocean and the first to sail around the world. Magellan's voyage is said to have proved that the Earth was round.

He was also the first to sail through the Strait of Magellan, so it was named after him. Magellan himself was killed in the Philippines, on April 27, 1521, in Mactan during a battle with the natives after he was accused of stealing.

Charles V of Spain provided him with five ships for the voyage round the world. Only one ship, the Victoria, completed the voyage. 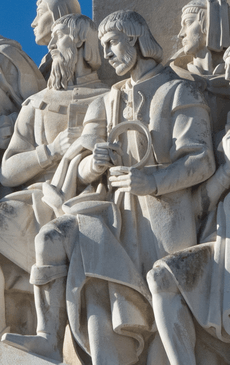 Effigy of Ferdinand Magellan in the Monument to the Discoveries, in Lisbon, Portugal

Magellan was born in 1480. His birthplace is recorded as either Sabrosa or Porto in Portugal. He worked in the royal court.

Since his parents were members of the Portuguese nobility, after their deaths, Magellan became a page for the queen at the age of 10.

In the royal court, he learned many important skills, including map-making, navigation, and astronomy.

In 1505, when he was 25, he joined the navy. When he worked for Portugal, he went to many parts of the world, such as India, the Spice Islands, East Africa, and Morocco. When in Morocco in 1513, Magellan was wounded and walked the remainder of his life with a limp. After he lost his job for the King of Portugal, he went to work for the King of Spain.

He was married to Beatriz Barbosa and had two children: Rodrigo and Carlos.

Spanish Search of the Spice Islands

The aim of Christopher Columbus's voyage to the West was to reach the coasts of the Spice Islands (or the Indies) and to establish trade between Spain and the several Asian kingdoms. The Spanish soon realized after Columbus' voyages that the lands of the Americas were not a part of Asia, but a new continent.

When Magellan arrived at the Court of Spain, he presented King Charles V a plan which would give the ships of the Crown of Castile full access to the lands of the Spice Islands. 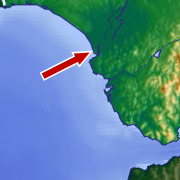 The arrow points to the city of Sanlúcar de Barrameda on the delta of the Guadalquivir River, in Andalusia.

On August 10, 1519, five ships under Magellan's command left Seville and traveled west from the Guadalquivir River to Sanlúcar de Barrameda at the mouth of the river, where they remained for more than five weeks. Magellan set sail from Sanlúcar de Barrameda with about 270 men on September 20.

After stopping at the Canary Islands, Magellan arrived at Cape Verde, where he set a course for Cape St. Augustine in Brazil. On November 27, the expedition crossed the equator; on December 6, the crew sighted South America. 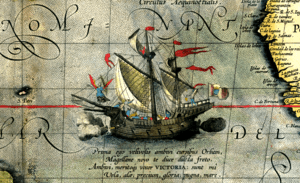 Since Brazil was Portuguese territory, Magellan avoided it, and on December 13 anchored near present-day Rio de Janeiro where they resupplied. They continued to sail south along South America's east coast, looking for the strait that Magellan believed would lead to the Spice Islands. The fleet reached Río de la Plata on January 10, 1520.

On March 30, the crew established a settlement that they called Puerto San Julian.

On April 2, a mutiny involving two of the ship captains broke out, but it was unsuccessful because the crew remained loyal. Some of the captains involved in the mutiny were executed; years later, their bones were found by Sir Francis Drake. 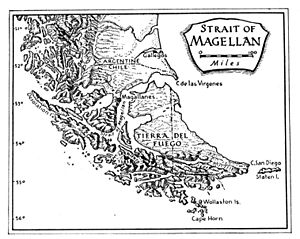 The Strait of Magellan cuts through the southern tip of South America connecting the Atlantic Ocean and Pacific Ocean.

The journey resumed. The ship Santiago was sent down the coast on a scouting expedition but was wrecked in a sudden storm. All of its crew survived and made it safely to shore. Two of them returned, traveling on land, to let Magellan know what had happened and to help rescue their comrades. After this experience, Magellan decided to wait for a few weeks more before continuing the voyage.

At 52°S latitude on October 21, the fleet reached Cape Virgenes and they decided they had found the passage because even though they went deep inland, the water was still brine (salty). Four ships began the hard trip through the 373-mile (600 km) passage that Magellan called the Estrecho (Canal) de Todos los Santos ("All Saints' Channel") because the fleet traveled through it on November 1, or All Saints' Day. The strait is now named the Strait of Magellan.

Magellan first assigned the ships Concepción and San Antonio to explore the strait. The San Antonio deserted and returned to Spain on November 20, leaving three ships: Concepción, Trinidad, and Victoria.

Magellan was the first European to reach Tierra del Fuego just east of the Pacific side of the strait.

On November 28, the three ships entered the South Pacific. Magellan named the waters the Mar Pacifico (Pacific Ocean) because it looked so still.

Heading northwest, the crew reached the equator on February 13, 1521. On March 6, they reached the Marianas and Guam. Magellan called Guam the "Island of Sails" because they saw a lot of sailboats. They renamed it to "Ladrones Island" (Island of Thieves) because many of Trinidad's small boats were stolen there. 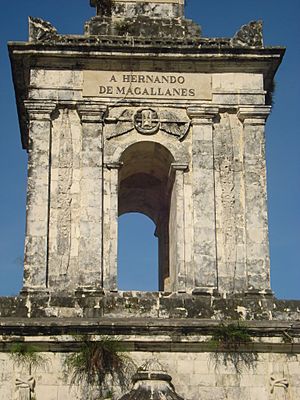 Monument in Lapu-Lapu City, Cebu in the Philippines.

Magellan was able to communicate with the native people because his Malay interpreter, Enrique, could understand their language. Enrique was an indentured servant of Magellan. Magellan and his crew traded gifts with Rajah Kolambu of Limasawa, who guided them to Cebu on April 7.

Rajah Humabon of Cebu was friendly to Magellan, and he and his queen, Juana, even accepted Christianity. Afterward, Humabon and his rival Datu Zula convinced Magellan to go kill their enemy, Lapu-Lapu, on Mactan.

Magellan wanted to convert Lapu-Lapu to Christianity. On the morning of April 17, 1521, Magellan sailed to Mactan with an army of men. During the resulting Battle of Mactan against indigenous forces led by Lapu-Lapu, Magellan was killed.

In his will, Magellan said that Enrique, his interpreter, was to be freed upon his death. However, the remaining ships' masters refused to free Enrique. Enrique escaped on May 1. 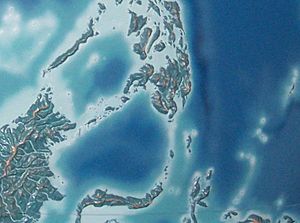 Because so many men died in the Philippines, it left the expedition with too few men to sail the three remaining ships.

On May 2, they abandoned Concepción and burned it to make sure the ship could not be used against them. This left them with two ships, Trinidad and Victoria, that fled westward to Palawan. They left that island on June 21 and were guided to Brunei, Borneo by Moro pilots who knew how to travel on the shallow seas.

The ships anchored off the shore of Brunei for 35 days, where they saw the splendor of Rajah Siripada's court (gold, two pearls the size of hens' eggs, etc.). They saw that Brunei also had tame elephants and an armament of 62 cannons, more than 5 times the cannons of Magellan's ships. They also had things such as porcelain and eyeglasses, which were not available or only just becoming available in Europe. 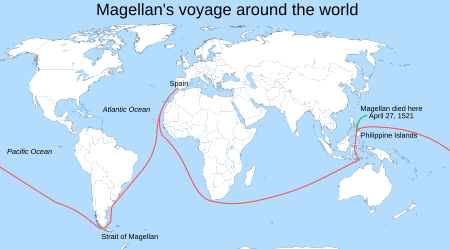 One of Magellan's ships, Victoria, circumnavigated the globe, finishing 16 months after the explorer's death.

After reaching the Maluku Islands (the Spice Islands) on November 6, 115 crew were left. They managed to trade with the Sultan of Tidore, a rival of the Sultan of Ternate, who was the ally of the Portuguese.

The two remaining ships, packed with valuable spices, tried to return to Spain by sailing west. However, as they left the Spice Islands, Trinidad began to take on water. The crew tried to discover and repair the leak but failed. Victoria sailed ahead, taking the Indian Ocean route heading west for Spain on December 21. The ship was commanded by Juan Sebastián Elcano. Several weeks later, Trinidad departed and attempted to return to Spain by traveling east on the Pacific route. This attempt failed. Trinidad was captured by the Portuguese, and was eventually wrecked in a storm while at anchor under Portuguese control. 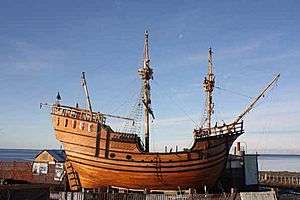 By May 6, 1522, the Victoria rounded the Cape of Good Hope, with only rice for rations. Twenty crewmen died of starvation.

On September 6, 1522, Elcano and the remaining crew of Magellan's voyage arrived in Spain aboard the last ship in the fleet, Victoria, almost exactly three years after they departed.

Magellan had not intended to circumnavigate the world. He had only wanted to find a secure way through which the Spanish ships could navigate to the Spice Islands. It was Elcano who, after Magellan's death, decided to push westward and completed the first voyage around the entire Earth.

In total, approximately 232 Spanish, Portuguese, Italian, French, English, and German sailors died on the expedition around the world with Magellan. 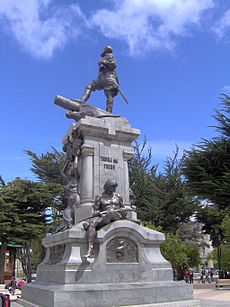 Monument of Ferdinand Magellan in Punta Arenas in Chile. The statue looks toward the Strait of Magellan.

Magellan's crew observed several animals that were entirely new to European science, including a "camel without humps", which could have been a llama, guanaco, vicuña, or alpaca. They called a penguin a black "goose" that had to be skinned instead of plucked.

Two of the closest galaxies, the Magellanic Clouds, were discovered by crew members in the southern hemisphere. The full extent of the Earth was also realized, since their voyage was 14,460 leagues, or 43,400mi (69,800km).

Finally, the need for an International Date Line was established. Upon their return, the crew observed a mismatch of one day between their calendars and those who did not travel, even though they faithfully maintained their ship's log. However, they did not have clocks accurate enough to observe the variation in the length of the day during the journey. News of the mismatched day caused great excitement at the time. People traveled to the Pope to explain this oddity to him.

All content from Kiddle encyclopedia articles (including the article images and facts) can be freely used under Attribution-ShareAlike license, unless stated otherwise. Cite this article:
Ferdinand Magellan Facts for Kids. Kiddle Encyclopedia.