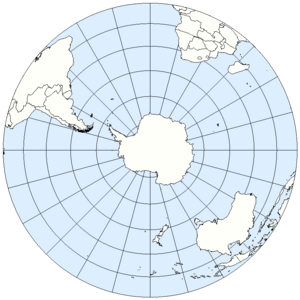 The Southern Hemisphere from above the South Pole

The Southern Hemisphere highlighted in yellow. The hemispheres appear to be unequal in this image due to Antarctica not being shown, but in reality are the same size.

The Southern Hemisphere is the half of Earth that is south of the Equator. It contains all or parts of five continents (Antarctica, Australia, about 90% of South America, one third of Africa, and several islands off the continental mainland of Asia), four oceans (Indian, South Atlantic, Southern, and South Pacific) and most of the Pacific Islands in Oceania. Its surface is 80.9% water, compared with 60.7% water in the case of the Northern Hemisphere, and it contains 32.7% of Earth's land.

Owing to the tilt of Earth's rotation relative to the Sun and the ecliptic plane, summer is from December to March and winter is from June to September. September 22 or 23 is the vernal equinox and March 20 or 21 is the autumnal equinox. The South Pole is in the center of the southern hemispherical region.

Southern Hemisphere climates tend to be slightly milder than those at similar latitudes in the Northern Hemisphere, except in the Antarctic which is colder than the Arctic. This is because the Southern Hemisphere has significantly more ocean and much less land; water heats up and cools down more slowly than land. The differences are also attributed to oceanic heat transfer and differing extents of greenhouse trapping. 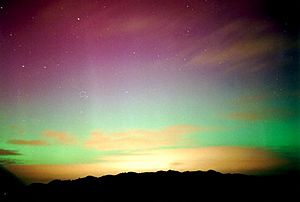 In the Southern Hemisphere, the sun passes from east to west through the north, although north of the Tropic of Capricorn the mean sun can be directly overhead or due north at midday. The Sun rotating through the north causes an apparent right-left trajectory through the sky unlike the left-right motion of the Sun when seen from the Northern Hemisphere as it passes through the southern sky. Sun-cast shadows turn anticlockwise throughout the day and sundials have the hours increasing in the anticlockwise direction. During solar eclipses viewed from a point to the south of the Tropic of Capricorn, the Moon moves from left to right on the disc of the Sun (see, for example, photos with timings of the solar eclipse of November 13, 2012), while viewed from a point to the north of the Tropic of Cancer (i.e., in the Northern Hemisphere), the Moon moves from right to left during solar eclipses.

The southern temperate zone, a subsection of the Southern Hemisphere, is nearly all oceanic. This zone includes the southern tip of Uruguay and South Africa; the southern half of Chile and Argentina; parts of Australia, going south from Adelaide, and all of New Zealand.

The Sagittarius constellation that includes the galactic centre is a southern constellation as well as both Magellanic Clouds. This, combined with clearer skies, makes for excellent viewing of the night sky from the Southern Hemisphere with brighter and more numerous stars.

Forests in the Southern Hemisphere have special features which set them apart from those in the Northern Hemisphere. Both Chile and Australia share, for example, unique beech species or Nothofagus, and New Zealand has members of the closely related genera Lophozonia and Fuscospora. The eucalyptus is native to Australia but is now also planted in Southern Africa and Latin America for pulp production, and increasingly, biofuel uses. 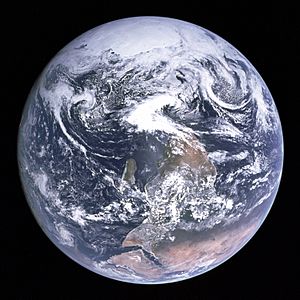 A photo of Earth from Apollo 17 (Blue Marble) originally had the south pole at the top; however, it was turned upside-down to fit the traditional perspective

The most widespread religions in the Southern Hemisphere are Christianity in South America, southern Africa, and Australia/New Zealand, followed by Islam in most of the islands of Indonesia and in parts of southeastern Africa, and Hinduism, which is mostly concentrated on the island of Bali and neighboring islands.

The oldest continuously inhabited city in the Southern Hemisphere is Bogor, in western Java, which was founded in 669 CE. Ancient texts from the Hindu kingdoms prevalent in the area definitively record 669 CE as the year when Bogor was founded. However, some evidence shows that Zanzibar, an ancient port with around 200,000 inhabitants on the coast of Tanzania, may be older than Bogor. A Greco-Roman text written between 1 and 100 CE, the Periplus of the Erythraean Sea, mentioned the island of Menuthias (Ancient Greek: Μενουθιάς) as a trading port on the east African coast, which is probably the small island of Unguja on which Zanzibar is located. The oldest monumental civilizations in the Southern Hemisphere are the Norte Chico civilization and Casma–Sechin culture from the northern coast of Peru. These civilizations built cities, pyramids, and plazas in the coastal river valleys of northern Peru with some ruins dated back to 3600 BCE.

All content from Kiddle encyclopedia articles (including the article images and facts) can be freely used under Attribution-ShareAlike license, unless stated otherwise. Cite this article:
Southern Hemisphere Facts for Kids. Kiddle Encyclopedia.