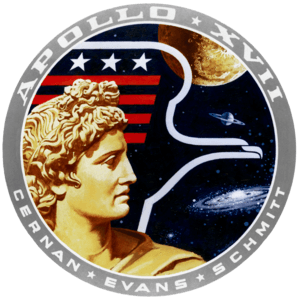 Apollo 17 was the last flight to send people to the moon. It was done by NASA, the American space group.

It went up to space on December 7, 1972, carrying three astronauts: Eugene Cernan, Harrison Schmitt and Ronald Evans. On December 11, 1972, Cernan and Schmitt became the last humans to land on the moon, while Evans stayed in orbit around the Moon.

Going to and from space

About 500,000 people viewed the flight of Apollo 17. A Saturn V rocket took flight from the Kennedy Space Center in America. 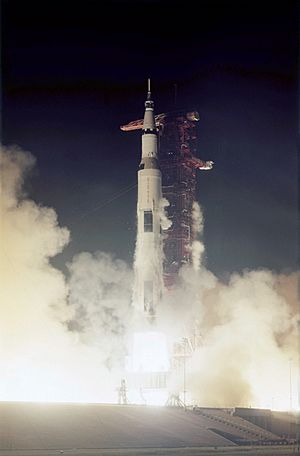 About two hours after leaving Earth the bit with the people in it went away from the main rocket. The bit with the people in it had two parts, the Apollo Command Module called America and the Apollo Lunar Module called Challenger. America was the moon control space ship and Eagle was the moon-landing space ship. 3 days later the team entered Lunar Orbit (orbit around the moon). A day later the Challenger went away from America. The Challenger landed safely on the moon with Eugene Cernan and Harrison Schmitt inside.

All content from Kiddle encyclopedia articles (including the article images and facts) can be freely used under Attribution-ShareAlike license, unless stated otherwise. Cite this article:
Apollo 17 Facts for Kids. Kiddle Encyclopedia.