Orbit is also a word for an eye socket. 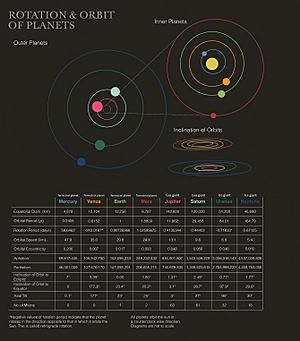 Two bodies with a slight difference in mass orbiting around a common barycenter. This is like the Pluto-Charon system

An orbit is the path that an object takes in space when it goes around a star, a planet, or a moon. It can also be used as a verb. For instance: “The earth orbits around the Sun.” The word ‘revolves’ has the same meaning, but 'rotates' is the spin of the object.

Many years ago, people thought that the Sun orbits in a circle around the earth. Every morning the Sun came up in the east and went down in the west. It just seemed to make sense that it was going around the earth. But now, thanks to people like Copernicus and Galileo Galilei, we know that the Sun is the center of the Solar System, and the earth orbits around it. Isaac Newton discovered that gravity controls the orbit of the planets and moons. Since a satellite is an object in space that revolves around another object, the earth is a satellite of the sun, just like the moon is a satellite of the Earth! The sun has lots of satellites orbiting around it, like the planets, and thousands of asteroids, comets, and meteoroids. The Earth just has one natural satellite (the Moon), but there are many artificial satellites orbiting the earth.

An orbital period is the time that it takes for one object - that is, satellite - to orbit around another object. For instance, the Earth's orbital period is one year: 365.25 days. (The extra ".25" is why we have a leap day once every four years).

The Moon takes 27 days (29.53 days as seen from Earth) to go around the Earth and also to rotate around its own axis. This is why only one side always faces the Earth and the "dark side of the Moon" faces away (it is called dark because we cannot see it, though all sides of the moon get equal light). One lunar year and one lunar day take the same amount of time.

Johannes Kepler (lived 1571-1630) wrote mathematical "laws of planetary motion", which gave a good idea of the movements of the planets because he found that the orbits of the planets in our Solar System are not really circles, but are really ellipses (a shape like a "flattened circle"). That is why orbits are described as elliptical. The more elliptical an orbit is, the more eccentric the orbit is. This is called orbital eccentricity.

Isaac Newton (lived 1642-1727) used his own ideas about gravity to show why Kepler's laws worked the way they did.

All content from Kiddle encyclopedia articles (including the article images and facts) can be freely used under Attribution-ShareAlike license, unless stated otherwise. Cite this article:
Orbit Facts for Kids. Kiddle Encyclopedia.