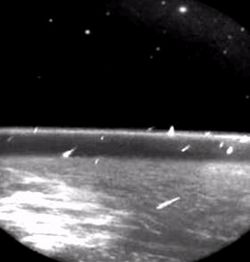 A meteor is what you see when a space rock falls to Earth. It is often known as a shooting star or falling star and can be a bright light in the night sky, though most are faint. A few survive long enough to hit the ground. That is called a meteorite, and a large one sometimes leaves a hole in the ground called a crater.

Meteorites were many during the Late Heavy Bombardment. Nowadays they sometimes hurt people and property. The 2013 Russian meteor event did the most damage. Large meteorite strikes may have played a part in several of the mass extinctions, and so indirectly on the course of evolution. (see K/T extinction event; List of extinction events; Chicxulub crater) 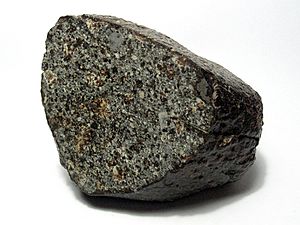 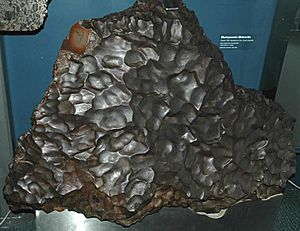 About 8 percent of meteorites show signs of melting and recrystallizing. They look rather like basalt or granite. 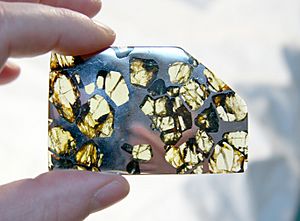 Iron meteorites are meteorites made of an iron–nickel alloy. They are about 6 percent of all meteorites. This comes from the inner cores of early small proto-planets. The iron found in iron meteorites was one of the earliest sources of usable iron, before humans invented smelting. That signalled the beginning of the iron age. Iron meteorites are easily found, because native iron is rare.

Siderolites are stony-iron meteorites that have almost equal parts of iron and silicates. They are quite rare: only about 1 percent of all meteorites are siderolites.