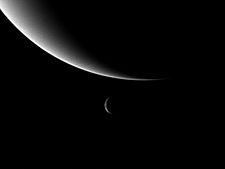 Neptune has a total of 14 known moons. The largest moon is Triton which was discovered by William Lassell just seventeen days after Neptune was found. One hundred years later the second moon, Nereid was found. The Hubble Telescope found the 14th moon in 2013.

Most of Neptune's moons are named after sea nymphs.

Neptune has moons which have unusual orbits. Triton, the largest moon of Neptune, has a retrograde orbit (which means Triton orbits or moves the opposite way from how Neptune spins).

Two moons, Psamathe (discovered in 2002) and Neso (discovered in 2003), are unusual because they have the largest orbits for any moons discovered in the solar system so far. They take about 25 years to make one orbit and are 125 times more distant from Neptune than our Moon is from Earth.

Many astronomers and scientists think that Neptune's inner moons were not original bodies that formed with Neptune, but were remains of debris from Triton that slowly came together. Other scientists think that when Triton was captured by Neptune, Triton's mass and odd orbit caused Neptune's original moons to be destroyed by gravity, only to be reformed after Triton formed a stable orbit.

While many astronomers agree that Triton was not an original moon of Neptune, some think that Triton was captured in a "three-body-encounter". What must have happened was that Triton was part of a binary pair with another unknown celestial body. The pair was then captured but Triton survived and the other object being affected by Neptune's gravity.

Halimede, discovered in 2002, was perhaps a piece of Nereid when the moon was hit with another object. Both moons seemed to have the same gray colors. Also Halimede was also calculated that the moon had a high chance of colliding with Nereid in the past.

The Neptunian moons are listed here by its orbital period, from shortest to longest. Triton, which is not only massive enough for its surface to have collapsed into a sphere, but is comparable in size to our own moon, is highlighted in purple. Irregular (captured) moons are shown in grey; prograde in light grey and retrograde in dark grey. (Triton is also thought to be captured.) 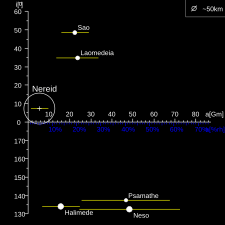 The picture at the right shows the orbits of Neptune's irregular moons discovered so far. The eccentricity of the orbits is represented by the yellow segments (extending from the pericentre to the apocentre) with the inclination represented on Y axis. The satellites above the X axis are prograde, the satellites beneath are retrograde. The X axis is labelled in Gm (million km) and the fraction of the Hill sphere's (gravitational influence) radius (~116 Gm for Neptune).

Given the similarity of their orbits, it was suggested that Neso and Psamathe could have a common origin in the break-up of a larger moon.

Triton, the biggest moon following a retrograde but a quasi-circular orbit, also thought to be a captured satellite, is not shown. Nereid, on a prograde but very eccentric orbit is believed to be scattered during Triton's capture.

All content from Kiddle encyclopedia articles (including the article images and facts) can be freely used under Attribution-ShareAlike license, unless stated otherwise. Cite this article:
List of Neptune's moons Facts for Kids. Kiddle Encyclopedia.