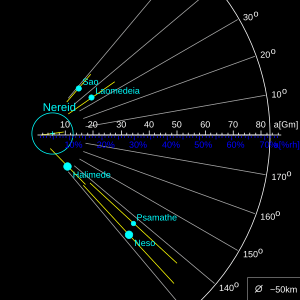 Sao orbits Neptune at a distance of about 22.4 million km and is about 44 kilometers in diameter (assuming an albedo of 0.04).

Sao has a very inclined and eccentric orbit seen on the diagram in relation to other non-sperical moons of Neptune.

Sao, or Neptune XI, like many of the farther moons of Neptune, is named after one of the Nereids; Sao was associated with sailing and is referred to as "The rescuer" or "Safety". Before the announcement of its name on February 3, 2007 (IAUC 8802), Sao was known provisionally as S/2002 N 2.

All content from Kiddle encyclopedia articles (including the article images and facts) can be freely used under Attribution-ShareAlike license, unless stated otherwise. Cite this article:
Sao (moon) Facts for Kids. Kiddle Encyclopedia.