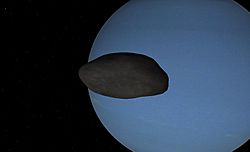 Thalassa or Neptune IV, is the second closest moon to Neptune. It was named after a daughter of Aether and Hemera from Greek mythology. "Thalassa" is also the Greek word for "sea".

Thalassa was discovered sometime before mid-September, 1989 from the images taken by the Voyager 2 probe. It was given the designation S/1989 N 5. The discovery was said (IAUC 4867) on September 29, 1989, but the text only talks of "25 frames taken over 11 days", giving a discovery date of sometime before September 18. The name was given on 16 September 1991.

Thalassa is not a sphere and shows no sign of any geological changes. Unusually for a non-spherical moon, it appears to be disk-shaped.

All content from Kiddle encyclopedia articles (including the article images and facts) can be freely used under Attribution-ShareAlike license, unless stated otherwise. Cite this article:
Thalassa (moon) Facts for Kids. Kiddle Encyclopedia.