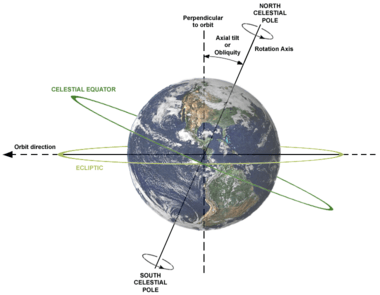 In astronomy, axial tilt is the angle between a planet's rotational axis at its north pole and a line perpendicular to the orbital plane of the planet. It is also called axial inclination or obliquity. The axial tilt of Earth is the cause of seasons like summer and winter on Earth.

Axial tilt of bodies in the Solar System

The axial tilts of Venus, Uranus and Pluto are greater than 90 degrees for the following reasons:

All content from Kiddle encyclopedia articles (including the article images and facts) can be freely used under Attribution-ShareAlike license, unless stated otherwise. Cite this article:
Axial tilt Facts for Kids. Kiddle Encyclopedia.