The Sun is the star in the center of our solar system. It is a yellow dwarf star. It gives off energy as light. That includes light, infra-red energy (heat), ultraviolet light and radio waves. It also gives off a stream of particles, which reaches Earth as "solar wind". The source of all this energy is nuclear fusion. Nuclear fusion is the reaction in the star which turns hydrogen into helium and makes huge amounts of energy.

The Sun fuses about 600 million tons of hydrogen into helium every second. It can take between 10,000 and 170,000 years for the energy in the core of the Sun to escape.

Scientists think that the Sun started from a very large cloud of dust and small bits of ice about 4.567 billion years ago.

At the center of that huge cloud, gravity caused the material to build up into a ball. Once this got big enough, the huge pressure inside started a fusion reaction. The energy this released caused that ball to heat and shine. 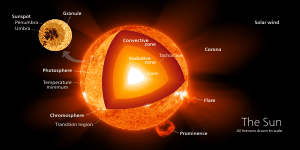 Diagram of the Sun

The Sun's chemical composition was gotten from the interstellar medium. The hydrogen and most of the helium in the Sun would have been produced by Big Bang nucleosynthesis in the first 20 minutes of the universe. The heavier elements were produced by stars that died before the Sun was formed. The heavier elements were released into the interstellar medium when the star exploded as a supernovae.

This is the surface of the Sun. The light that the Earth receives from the Sun is radiated from this layer. Below this layer, the Sun is opaque, or not transparent to light. 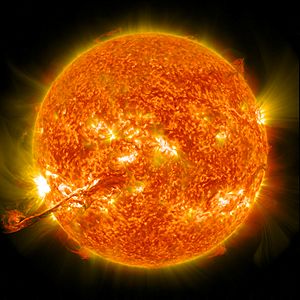 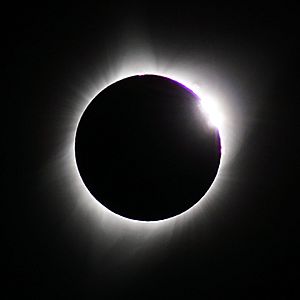 Total eclipse of the sun, the violet color shows the sun's chromosphere

Five layers make up the atmosphere of the Sun. The chromosphere, transition region, and corona are much hotter than the outer photosphere surface of the Sun. It is believed that Alfvén waves may pass through to heat the corona.

The minimum temperature zone, the coolest layer of the Sun, is about 500 kilometres (310 miles) above the photosphere. It has a temperature of about 4,100 K (3,830 °C; 6,920 °F). This part of the Sun is cool enough to allow simple molecules such as carbon monoxide and water to form. These molecules can be seen on the Sun with special instruments called spectroscopes.

The chromosphere is the first layer of the Sun which can be seen, especially during a solar eclipse when the moon is covering most of the Sun and blocking the brightest light.

The solar transition region is the part of the Sun's atmosphere, between the chromosphere and outer part called the corona. It can be seen from space using telescopes that can sense ultraviolet light. The transition is between two very different layers. In the bottom part it touches the photosphere and gravity shapes the features. At the top, the transition layer touches the corona.

The heliosphere is the thin outer atmosphere of the Sun, filled with the solar wind plasma. It extends out past the orbit of Pluto to the heliopause, where it forms a boundary where it collides with the interstellar medium. 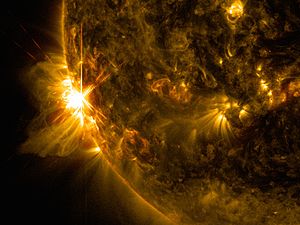 Since the Sun is all gas, surface features come and go. If the Sun is viewed through a special solar telescope, dark areas called sunspots can be seen. These areas are caused by the Sun's magnetic field. The sunspots only look dark because the rest of the Sun is very bright.

Some space telescopes, including the ones that orbit the Sun have seen huge arches of the Sun's matter extend suddenly from the Sun. These are called solar prominences. Solar prominences come in many different shapes and sizes. Some of them are so large that the Earth could fit inside of them, and a few are shaped like hands. Solar flares also come and go.

Sunspots, prominences and flares become rare, and then numerous, and then rare again, every 11 years. 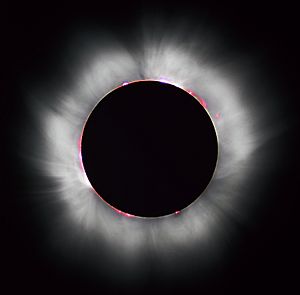 A solar eclipse appears when the moon is between the Earth and Sun. The last total solar eclipse occurred on Dec. 26, 2019, and was visible from Saudi Arabia, India, Sumatra and Borneo, with a partial eclipse visible in Australia and much of Asia.

A lunar eclipse happens when the moon passes through the shadow of the Earth which can only occur during a full moon.The number of lunar eclipses in a single year can range from 0 to 3. Partial eclipses slightly outnumber total eclipses by 7 to 6. 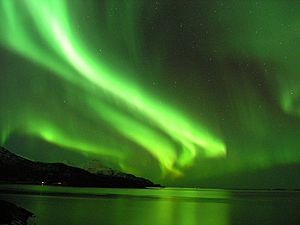 Solar weather affects us on Earth. Solar weather (also called space weather) includes sunlight and the solar wind. Solar flares shoot a lot of very hot gas out from the Sun. If a solar flare is aimed towards Earth, protons — subatomic particles with positive electric charge — can be shot at Earth at high speed, and a solar storm could result. This could cause electrical blackouts or block radio signals. It damages satellites in orbit. Radiation from an extreme solar storm could be very dangerous for astronauts, so they must be protected. The Earth’s magnetic field and atmosphere usually protect us from flares.

Solar flares can also cause an aurora. Auroras look like beautiful curtains of shimmering light. They are called Northern Lights (Aurora Borealis) if they are near the North Pole. They are called Southern Lights (Aurora Australis) if they are near the South Pole. Solar weather affects other planets, too. We have pictures of auroras on every planet except Mercury and Pluto.

The Sun has eight known planets. This includes four terrestrial planets (Mercury, Venus, Earth, and Mars), two gas giants (Jupiter and Saturn), and two ice giants (Uranus and Neptune). The Solar System also has at least five dwarf planets, an asteroid belt, numerous comets, and a large number of icy bodies which lie beyond the orbit of Neptune. 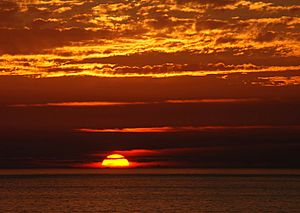 During certain atmospheric conditions such as a sunset, the Sun becomes clearly visible to the naked eye, and can be observed without stress to the eyes

The brightness of the Sun can cause pain from looking at it with the naked eye; however, doing so for brief periods is not hazardous for normal non-dilated eyes.

Viewing the Sun through light-concentrating optics such as binoculars may result in permanent damage to the eyes. 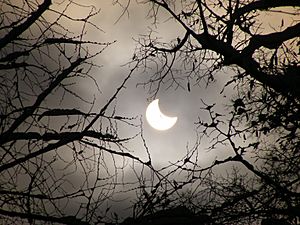 Partial solar eclipses are hazardous to view because the eye's pupil is not adapted to the unusually high visual contrast.

Ultraviolet light from the Sun has antiseptic properties and can be used to sanitize tools and water. It also causes sunburn, and has other biological effects such as the production of vitamin D and sun tanning.

Ultraviolet light is strongly reduced in force by Earth's ozone layer, so that the amount of UV varies greatly with latitude and has been partially responsible for many biological adaptations, including variations in human skin color in different regions of the Earth.

Exploration of the Sun 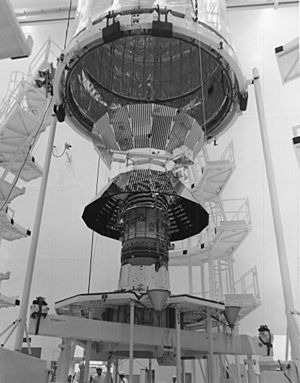 The cost of the project is US$1.5 billion. Johns Hopkins University Applied Physics Laboratory designed and built the spacecraft, which was launched on August 12, 2018. It became the first NASA spacecraft named after a living person, honoring physicist Eugene Parker, professor emeritus at the University of Chicago.

A memory card containing the names of over 1.1 million people was mounted on a plaque and installed below the spacecraft's high-gain antenna on May 18, 2018. The card also contains photos of Parker and a copy of his 1958 scientific paper predicting important aspects of solar physics.

Fate of the Sun

Astrophysicists say our Sun is a G-type main-sequence star in the middle of its life. In a billion years or so, increased solar energy will boil away the Earth's atmosphere and oceans. In a few more billion years, they think the Sun will get bigger and become a red giant star. The Sun would be up to 250 times its current size, as big as 1.4 AU (210,000,000 kilometres; 130,000,000 miles) and will swallow up the Earth.

Earth's fate is still a bit of a mystery. In the long term, the Earth's future depends on the Sun, and the Sun is going to be fairly stable for the next 5 billion years. Calculations suggest that the Earth might move to a wider orbit. This is because about 30% of the Sun's mass will blow away in the solar wind. However, in the very long term the Earth will probably be destroyed as the Sun increases in size. Stars like the Sun become red giants at a later stage. The Sun will expand beyond orbits of Mercury, Venus, and probably Earth. In any event, the ocean and air would have vanished before the Sun gets to that stage.

After the Sun reaches a point where it can no longer get bigger, it will lose its layers and form a planetary nebula. Eventually, the Sun will shrink into a white dwarf. Then, over several hundred billion or even a trillion years, the Sun would fade into a black dwarf.

All content from Kiddle encyclopedia articles (including the article images and facts) can be freely used under Attribution-ShareAlike license, unless stated otherwise. Cite this article:
Sun Facts for Kids. Kiddle Encyclopedia.