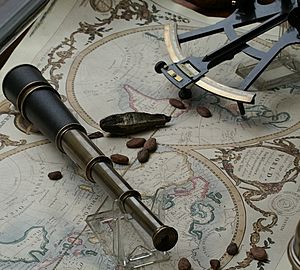 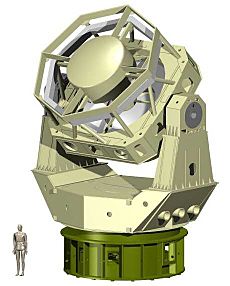 A telescope is an important tool for astronomy that gathers light and directs it to a single point. Some do this with curved mirrors, some with curved lenses, and some with both. Telescopes make distant things look bigger, brighter and closer. Galileo was the first person to use a telescope for astronomy, but he did not invent them. The first telescope was invented in the Netherlands in 1608. Some telescopes, not mainly used for astronomy, are binoculars, camera lenses, or spyglasses.

When telescopes are used with just your eye, an eyepiece has to be used. These use two or more smaller lenses to magnify an image. Without an eyepiece, an eye can not focus the image. When a telescope is used with a camera or other special scientific tools, eyepiece lenses are not needed.

Most big telescopes for astronomy are made for looking very carefully at things that are already known. A few are made to search for things, such as unknown asteroids. A telescope made to be used with a camera instead of just your eye are sometimes called "astrographs".

The word telescope is usually used for light human eyes can see, but there are telescopes for wavelengths we cannot see. Infrared telescopes look like normal telescopes, but have to be kept cold since all warm things give off infrared light. Radio telescopes are like radio antennas, usually shaped like large dishes.

X-ray and Gamma ray telescopes have a problem because the rays go through most metals and glasses. To solve this problem, the mirrors are shaped like a bunch of rings inside each other so the rays strike them at a shallow angle and are reflected. These telescopes are space telescopes because little of this radiation reaches the Earth. Other space telescopes are put in orbit so the Earth's atmosphere does not interfere.

Telescopes are mostly used for looking at celestial objects such as, the stars, planets, etc.

All content from Kiddle encyclopedia articles (including the article images and facts) can be freely used under Attribution-ShareAlike license, unless stated otherwise. Cite this article:
Telescope Facts for Kids. Kiddle Encyclopedia.