At the end of the Middle Ages the dukes of Burgundy, a country that is now part of France, united seventeen areas. Those areas were called the Netherlands. When the daughter of a duke married Maximilian I, Holy Roman Emperor, the Netherlands became part of Spain. In the 16th century many Dutch people became Protestant. The king of Spain did not like it, he wanted all Dutch to be Roman Catholic. He decided that all Protestants should be killed. Of course the Dutch people did not like this, and in 1568 they started a war against Spain. The war lasted until 1648, therefore it is called the Eighty Years' War. An important leader of the Dutch in this war was Willem van Oranje (Willem of orange) also called William the Silent.

In 1648 the Netherlands and Spain signed peace. The Dutch people were allowed to keep all the areas they conquered. The part of the Netherlands that was not conquered by the Dutch stayed part of Spain. Later this part became the country Belgium.

In the 17th century the Netherlands was the richest and one of the most powerful countries in the world. Therefore, the Dutch call the 17th century the Golden Age. Their Dutch Empire had possessions around the world. The most important possession were the East Indies, a country that is now called Indonesia. The Dutch also founded New Netherland, which is now called New York. The Netherlands often fought wars against other European countries, especially the Anglo-Dutch Wars against England. Michiel de Ruyter, a Dutch admiral, became a Dutch hero when he defeated the English navy close to London.

In 1815 Napoleon was defeated, and the Netherlands became independent again. The rulers of European countries thought it was a good idea to make the Netherlands stronger, to make them able to resist another French invasion. Therefore, Belgium and Luxembourg were added to the Netherlands. William I, the son of stadtholder William V, became king. The Belgians disliked their Dutch king. In 1830 they revolted. William sent an army. He was much more powerful than the Belgians but after ten days the French sent an army to support them. In 1831 the Belgians chose their own king and Belgium became an independent country.

Some people again thought the Dutch king had too much power. They wanted to give him less power and vote for the government themselves. In 1848 there were violent revolts against the kings of many European countries. The Dutch king was afraid the same would happen in the Netherlands. Therefore, he allowed Johan Rudolf Thorbecke to write a constitution. From then on people were allowed to vote. At first only rich men were allowed to vote. From 1919 on everyone was allowed to vote.

In World War I, the Netherlands did not fight. The Dutch wanted to stay neutral in World War II as well, but in 1940 the country was invaded and occupied by Germany. Like in other countries they had occupied, the National Socialist Party started to kill Jews. Anne Frank was a Jewish girl who lived in the Netherlands. Her family hid from the Nazis and she wrote a diary. She died in a Nazi concentration camp and her diary became famous.

In 1944 the American, Canadian, Polish and British armies liberated the south of the Netherlands from Nazi Occupation. They wanted to cross the Rhine river in Operation Market Garden to liberate the rest of the country, but they were defeated. It took until May 1945 before the entire country was liberated. During the five years of Nazi occupation, 250,000 people had died in the Netherlands.

Shortly after the war, Indonesia declared its independence. The Dutch sent soldiers to fight in Indonesia. During the war the Dutch realized how it is to be occupied by another country, so some thought they should not do the same to the Indonesians. After other countries, including the United States, told the Dutch to leave Indonesia, they finally did so in 1949.

The Netherlands is a constitutional monarchy. That means the country has a king or queen, but the real power is in hands of a parliament, chosen by the Dutch people. All Dutch people who are 18 or older are allowed to vote. There are elections every four years. After the elections, parties that have had a majority of the votes create a cabinet. The cabinet consists of a prime minister and several other ministers.

The following political parties are in the parliament:

The Netherlands is known for tolerance in politics.

Main page: Provinces of the Netherlands 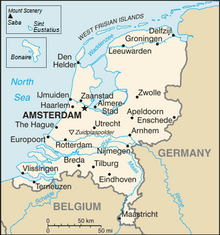 In the Netherlands there are 12 provinces: 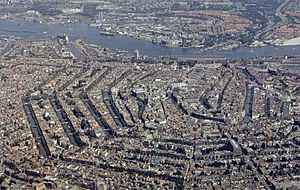 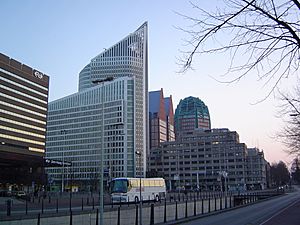 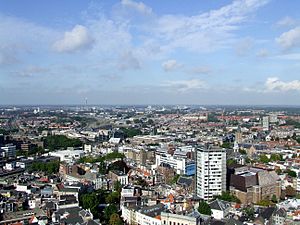 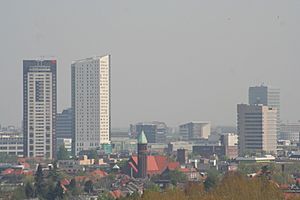 The Netherlands is a small flat country; about 300 kilometers from north to south, and about 170 kilometers from east to west. It has an oceanic climate (Cfb in the Köppen climate classification). 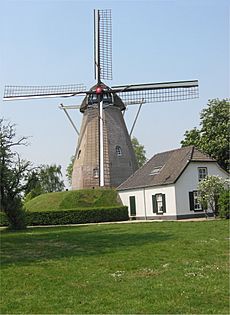 The Netherlands is a small country, but many people live there. It is one of the most densely populated countries of the world.

Most people in the Netherlands speak Dutch. In Friesland, about 200,000 people speak Frisian. Frisian is the language with the most similarities to English. Some Dutch people speak dialects. The Saxon dialects spoken in the northeastern part of the Netherlands are somewhat similar to Low German.

According to a survey done in 2006, 25% of the Dutch people are Christian and 3% believe in another organised religion, like Judaism, Islam or Hinduism. Twenty-six percent are 'unbounded spiritual' (have their own beliefs and are not tied to a religion). The other 44% are not religious.

Stroopwafels (syrup waffles) are a treat consisting of waffles with caramel-like syrup filling in the middle.

Poffertjes are made in a special, so-called, poffertjespan.

Bitterballen are usually served with mustard.

Originally, the country's cuisine was shaped by the practices of fishing and farming, including the cultivation of the soil for growing crops and raising domesticated animals. Dutch cuisine is simple and straightforward, and contains many dairy products. Breakfast and lunch are typically bread with toppings, with cereal for breakfast as an alternative. Traditionally, dinner consists of potatoes, a portion of meat, and (seasonal) vegetables. The Dutch diet was relatively high in carbohydrates and fat, reflecting the dietary needs of the labourers whose culture moulded the country. Without many refinements, it is best described as rustic, though many holidays are still celebrated with special foods. In the course of the twentieth century this diet changed and became much more cosmopolitan, with most global cuisines being represented in the major cities.

Modern culinary writers distinguish between three general regional forms of Dutch cuisine. The regions in the northeast of the Netherlands, roughly the provinces of Groningen, Friesland, Drenthe, Overijssel and Gelderland north of the great rivers are the least populated area of the Netherlands. The late (18th century) introduction of large scale agriculture means that the cuisine is generally known for its many kinds of meats. The relative lack of farms allowed for an abundance of game and husbandry, though dishes near the coastal regions of Friesland, Groningen and the parts of Overijssel bordering the IJsselmeer also include a large amount of fish. The various dried sausages, belonging to the metworst-family of Dutch sausages are found throughout this region and are highly prized for their often very strong taste. Also smoked sausages are common, of which (Gelderse) rookworst is the most renowned. The sausage contains a lot of fat and is very juicy. Larger sausages are often eaten alongside stamppot, hutspot or zuurkool (sauerkraut); whereas smaller ones are often eaten as a street food. The provinces are also home to hard textured rye bread, pastries and cookies, the latter heavily spiced with ginger or succade or contain small bits of meat. Various kinds of Kruidkoek (such as Groninger koek), Fryske dúmkes and spekdikken (small savory pancakes cooked in a waffle iron) are considered typical. Notable characteristics of Fries roggebrood (Frisian rye bread) is its long baking time (up to 20 hours), resulting in a sweet taste and a deep dark colour. In terms of alcoholic beverages, the region is renowned for its many bitters (such as Beerenburg) and other high-proof liquors rather than beer, which is, apart from Jenever, typical for the rest of the country. As a coastal region, Friesland is home to low-lying grasslands, and thus has a cheese production in common with the Western cuisine. Friese Nagelkaas (Friesian Clove) is a notable example.

The provinces of North Holland, South Holland, Zeeland, Utrecht and the Gelderlandic region of Betuwe are the parts of the Netherlands which make up the region in which western Dutch cuisine is found. Because of the abundance of water and flat grass lands that are found here, the area is known for its many dairy products, which includes prominent cheeses such as Gouda, Leyden (spiced cheese with cumin), Edam (traditionally in small spheres) as well as Leerdammer and Beemster, while the adjacent Zaanstreek in North Holland is since the 16th century known for its mayonnaise, typical whole-grain mustards and chocolate industry. Zeeland and South Holland produce a lot of butter, which contains a larger amount of milkfat than most other European butter varieties. A by-product of the butter-making process, karnemelk (buttermilk), is also considered typical for this region. Seafood such as soused herring, mussels (called Zeeuwse Mossels, since all Dutch mussels for consumption are cleaned in Zeeland's Oosterschelde), eels, oysters and shrimps are widely available and typical for the region. Kibbeling, once a local delicacy consisting of small chunks of battered white fish, has become a national fast food, just as lekkerbek. Pastries in this area tend to be quite doughy, and often contain large amounts of sugar; either caramelised, powdered or crystallised. The oliebol (in its modern form) and Zeeuwse bolus are good examples. Cookies are also produced in great number and tend to contain a lot of butter and sugar, like stroopwafel, as well as a filling of some kind, mostly almond, like gevulde koek. The traditional alcoholic beverages of this region are beer (strong pale lager) and Jenever, a high proof juniper-flavored spirit, that came to be known in England as gin. A noted exception within the traditional Dutch alcoholic landscape, Advocaat, a rich and creamy liqueur made from eggs, sugar and brandy, is also native to this region.

The Southern Dutch cuisine consists of the cuisines of the Dutch provinces of North Brabant and Limburg and the Flemish Region in Belgium. It is renowned for its many rich pastries, soups, stews and vegetable dishes and is often called Burgundian which is a Dutch idiom invoking the rich Burgundian court which ruled the Low Countries in the Middle Ages, renowned for its splendor and great feasts. It is the only Dutch culinary region that developed an haute cuisine. Pastries are abundant, often with rich fillings of cream, custard or fruits. Cakes, such as the Vlaai from Limburg and the Moorkop and Bossche Bol from Brabant, are typical pastries. Savoury pastries also occur, with the worstenbroodje (a roll with a sausage of ground beef, literally translates into sausage bread) being the most popular. The traditional alcoholic beverage of the region is beer. There are many local brands, ranging from Trappist to Kriek. 5 of the 10 International Trappist Association recognised breweries in the world, are located in the Southern Dutch cultural area. Beer, like wine in French cuisine, is also used in cooking; often in stews. 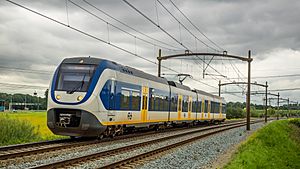 Nederlandse Spoorwegen (English: Dutch Railways) or NS is the main passenger railway operator in the Netherlands. The rail infrastructure is maintained by network manager ProRail, which was split off from NS in 2003. Freight services, formerly operated by NS Cargo, merged with the DB Schenker group in 2000.

NS runs 4,800 scheduled trains daily trains. In addition, NS provides international rail services from the Netherlands to other European destinations and carries out concessions on a number of foreign rail markets through its subsidiary Abellio such as Abellio Greater Anglia, Merseyrail and ScotRail.

All content from Kiddle encyclopedia articles (including the article images and facts) can be freely used under Attribution-ShareAlike license, unless stated otherwise. Cite this article:
Netherlands Facts for Kids. Kiddle Encyclopedia.