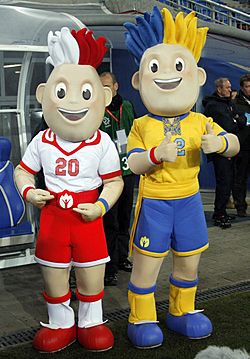 The UEFA Euro 2012 was the 14th UEFA European Football Championship tournament. Its formal name was 2012 UEFA European Football Championship. It was held in 8 June to 1 July. All the European football teams could compete. In general the contet of match was more higher than FIFA World Cup. The defending champion was Spain. The tournament was hosted in Poland and Ukraine. 16 teams were qualified for the final group stage. The winner of competition qualifies for the FIFA Confederations Cup.

51 teams wanted to join the Euro 2012, so UEFA organized the teams into 9 groups. Qualification began on August 2010 and ended on November 2011. The following teams qualified:

There were 8 stadiums in 8 host cities. The host cities were Warsaw, Gdańsk, Wrocław, Poznań, Kyiv, Lviv, Donetsk and Kharkiv. The Euro 2012 allowed new stadiums to be built. Six of the eight stadiums are either completely new, or greatly improved. Below is a table that will show what stadiums are being used, and in which cities. 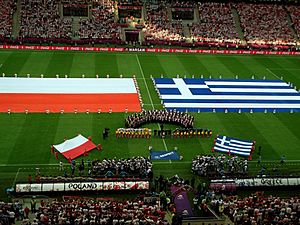 Greece were placed above Russia based on their head-to-head record (1-0).

Ukraine was placed on top of Sweden, because of their previous match against each other (2 – 1)

All content from Kiddle encyclopedia articles (including the article images and facts) can be freely used under Attribution-ShareAlike license, unless stated otherwise. Cite this article:
UEFA Euro 2012 Facts for Kids. Kiddle Encyclopedia.