Kharkiv, also known as Kharkov, is the second-largest city in Ukraine. In the northeast of the country, it is the largest city of the Slobozhanshchyna historical region. The city was founded in 1654 and after a humble beginning as a small fortress grew to be a major centre of Ukrainian industry, trade and culture in the Russian Empire.

Kharkiv was the first capital of the Ukrainian Soviet Socialist Republic, from December 1919 to January 1934, after which the capital relocated to Kiev. Presently, Kharkiv is a major cultural, scientific, educational, transport and industrial centre of Ukraine, with numerous museums, theatres and libraries.

Its industry specializes primarily in machinery and in electronics. There are hundreds of industrial companies in the city, including the Morozov Design Bureau and the Malyshev Tank Factory (leaders in world tank production from the 1930s to the 1980s); Khartron (aerospace and nuclear power plants automation electronics); the Turboatom (turbines for hydro-, thermal- and nuclear-power plants), and Antonov (the multipurpose aircraft manufacturing plant).

There is an underground rapid-transit system (metro) with about 35 km (22 mi) of track and 28 stations. A well-known landmark of Kharkiv is the Freedom Square (Maidan Svobody formally formerly known as Dzerzhinsky Square), which is currently the third largest city square in Europe, and the 7th largest square in the world. 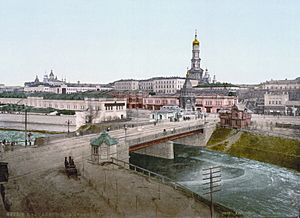 19th-century view of Kharkiv, with the Assumption Cathedral bell tower

Archeological evidence discovered in the area of present-day Kharkiv indicates that a local population has existed in that area since the 2nd millennium BC. Cultural artifacts date back to the Bronze Age, as well as those of later Scythian and Sarmatian settlers. There is also evidence that the Chernyakhov culture flourished in the area from the 2nd to the 6th century.

Founded in the middle of 17th century by a Ukrainian cossack called Kharko, the city has had a university since 1805. During the early years of the Soviet Union, Bolsheviks established Kharkiv as the capital of the Ukrainian Socialist Soviet Republic (from 1917–1934) in opposition to the Ukrainian Peoples Republic with its capital of Kiev.

Memorial to 23 August 1943, the end of German occupation during World War II

During World War II, Kharkiv was the site of several military engagements. The city was captured by Nazi Germany and its military allies on 24 October 1941; there was a disastrous Red Army offensive that failed to capture the city in May 1942; the city was successfully retaken by the Soviets on 16 February 1943, captured for a second time by the Germans on 16 March 1943 and then finally liberated on 23 August 1943.

Before the occupation, Kharkiv's tank industries were evacuated to the Urals with all their equipment, and became the heart of Red Army's tank programs (particularly, producing the legendary T-34 tank earlier designed in Kharkiv). These enterprises were returned after the war, and continue to produce some of the world's best tanks. Kharkiv was the third largest scientific-industrial center in the former USSR (after Moscow and Leningrad). 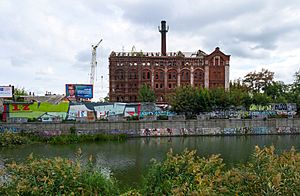 During the Soviet era Kharkiv was the capital of industrial production in Ukraine and one of the largest centres of industry and commerce in the USSR. After the collapse of the Soviet Union the largely defence-systems-oriented industrial production of the city decreased significantly. In the early 2000s the industry started to recover, now there are more than 380 industrial enterprises concentrated in the city, which have a total number of 150,000 employees. 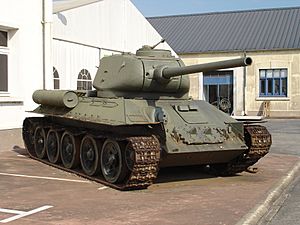 Industrial giants, such as Turboatom and Elektrotyazhmash own 17% of the heavy power equipment construction (e.g., turbines) market worldwide. Multipurpose aircraft are produced by the Antonov aircraft manufacturing plant. The Malyshev factory produces not only armoured fighting vehicles, but also harvesters.

Hartron is the leading designer of space and commercial control systems in Ukraine and the former CIS. 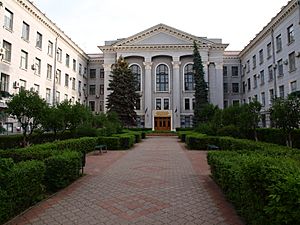 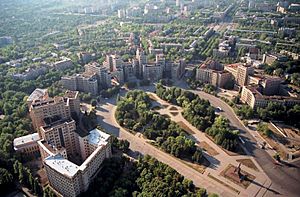 Kharkov is the unofficial capital of Ukrainian Science fiction and Fantasy. It is the home to popular writers like H. L. Oldie, Alexander Zorich, Yuri Nikitin and Andrey Valentinov. Annual science fiction convention "Star Bridge" has been held in Kharkiv since 1999.

All content from Kiddle encyclopedia articles (including the article images and facts) can be freely used under Attribution-ShareAlike license, unless stated otherwise. Cite this article:
Kharkov Facts for Kids. Kiddle Encyclopedia.