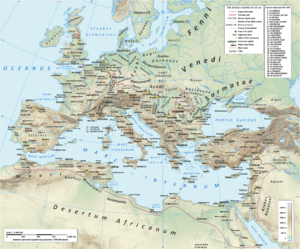 The Sarmatians ( Latin: Sarmatae, Sauromatae) were Iranian origin tribes that lived in a country called Sarmatia that is the present day Ukraine near the Black Sea shore. They were flourishing from 5th century BC to the 4-5th century AD.

At their greatest development, near 1st century AD, Sarmatian tribes covered the territories from the Vistula to the Volga. Sarmatians started to battle with Roman Empire forces together with Germanic tribes around 1st century AD.

All content from Kiddle encyclopedia articles (including the article images and facts) can be freely used under Attribution-ShareAlike license, unless stated otherwise. Cite this article:
Sarmatians Facts for Kids. Kiddle Encyclopedia.