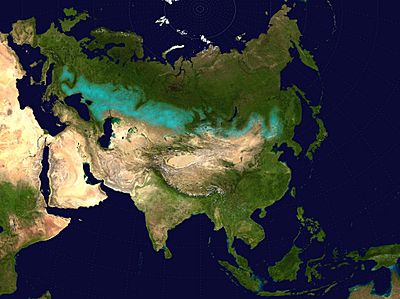 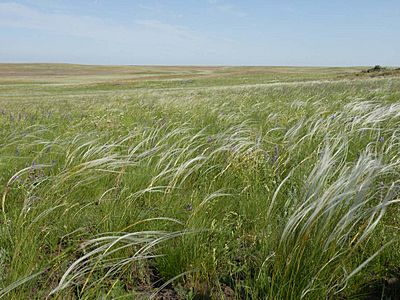 Russian steppe in the Orenburg Oblast

The Eurasian Steppe (or Ya'ou Steppe; 亚欧草原) is a steppe ecoregion (a huge stretch of grasslands) in north Eurasia. It stretches from Eastern Europe, Russia, Kazakhstan, to Mongolia and north China. It is south of Siberia.

For most of history, nomads lived and wandered there on horseback. The horse may have came from the steppe, around Kazakhstan. With the horses the steppe was a highway that moved people from China to Europe. For this reason it became important for the Silk Road.

All content from Kiddle encyclopedia articles (including the article images and facts) can be freely used under Attribution-ShareAlike license, unless stated otherwise. Cite this article:
Eurasian Steppe Facts for Kids. Kiddle Encyclopedia.