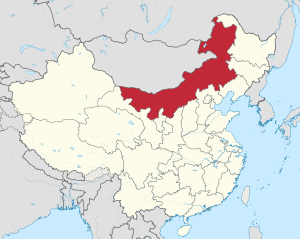 , Öbür mongɣul; Chinese: 内蒙古; pinyin: Nèi Měnggǔ; occasionally romanized to Nei Mongol) is the Mongol autonomous region of the People's Republic of China and lies in the north of the country.

Inner Mongolia borders, from east to west, the provinces of Heilongjiang, Jilin, Liaoning, Hebei, Shanxi, Shaanxi, Ningxia Hui Autonomous Region, and Gansu, while to the north it borders Mongolia and Russia. It is the third-largest subdivision of China spanning almost 300 million acres or 12% of China's land area. It has a population of about 24 million. The capital is Hohhot.

The majority of the population in the region are Han Chinese, with a large Mongol minority. The official languages are Standard Mandarin and Mongolian, the latter written in the classical alphabet. 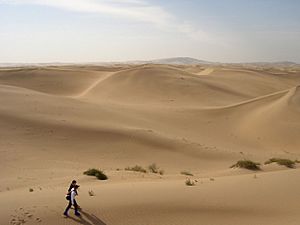 In Chinese, the region is known as "Inner Mongolia", where the terms of "Inner/Outer" come from Manchu dorgi/tulergi. Inner Mongolia is distinct from Outer Mongolia, which was a term used by the Republic of China and previous governments to refer to what is now the independent state of Mongolia plus the Republic of Tuva in Russia. In Mongolian, the region is known as öbör mongγol where öbör can mean south, inner, front, bosom, breast.

A KFC in Hohhot, the capital; All street signs must be bilingual with Mongol and Chinese

Excludes members of the People's Liberation Army in active service. 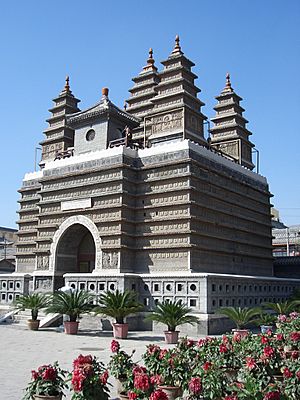 The Five Pagoda Temple in Höhhot, a Buddhist temple.

In the capital city Hohhot:

All content from Kiddle encyclopedia articles (including the article images and facts) can be freely used under Attribution-ShareAlike license, unless stated otherwise. Cite this article:
Inner Mongolia Facts for Kids. Kiddle Encyclopedia.