Mongolia is a country between China and Russia, in Asia.

Mongolia is a landlocked country in East Asia and Central Asia. It borders Russia to the north and the People's Republic of China to the south, east and west. Mongolia's political system is a parliamentary republic.

Until recently, most of the people there were Buddhists. Many of them are nomads (people who always move from place to place and do not stay in one home), but this is changing. The largest city, and capital city is Ulaanbaatar. It is where about 38% of the population live. This has been spelled Ulan Bator/ Ulaan Battor and other ways in the past. The north and east parts of the country have many mountains. Part of the south part is the Gobi Desert. There are 2,791,272 people living in Mongolia. The country is the 18th biggest country in the world, with an area of 1,564,116 km2 (603,909 sq mi). The crime rate is very low. Their language is Mongolian, and some people know English, Chinese, and Russian. Korean is being spoken more because more Mongolians are working in Korea.

Mongolia is mainly rural with the lowest population density of all independent countries in the world.

The area which is Mongolia has been ruled by various nomadic empires. This was until the great 'Mongol Empire' was founded by Genghis Khan in 1206. After the Yuan Dynasty collapsed, the Mongols became nomads again. After the 16th century, Mongolia were influenced by Tibetan Buddhism. By the end of the 17th century, most of Mongolia was part of an area ruled by the Qing Dynasty. When the Qing Dynasty collapsed in 1911, Mongolia declared independence. But they had to fight against the Chinese. They were helped by the Soviet Union. In 1921, the world accepted its independence. Shortly after the death of Bogd Khaan, the last monarch of Mongolia the monarchy was replaced by a communist government in 1924, and the country was renamed the Mongolian People's Republic. Up until the fall of the Soviet Union, Mongolia was a satellite state for the Soviets. The Mongolian Red Cross Society was set up in 1939. It has its headquarters in Ulaanbaator. Following the break-up of the Soviet Union in 1991, Russia's interest in Mongolia has declined. China and South Korea are currently Mongolia's main trade and political partners.

Mongolia is a parliamentary republic. People vote for their government. The President of Mongolia is elected to a four-year term, and cannot be elected President more than twice. The current President is Tsakhiagiin Elbegdorj. He is a two-time former prime minister and he was first elected as President on May 24, 2009. Elbegdorj was re-elected on 26 June 2013 for his second term as President.

A NASA satellite photo of Mongolia

Mongolia has a steppe climate. It has very cold winters and mild summers. Recently, winters have become very cold. This has killed many people and cattle. On June 2nd, 2008, 52 people and 200,000 head of cattle died in heavy blizzards in Mongolia.

On March 1–2, 2008, a heavy dust storm hit northeast China and parts of Mongolia. and ended over North Korea and South Korea on the March 4 .

Twenty one people died in a rural Mongolian blizzard on May 8, 2008. Parts of the Chinese province of Inner Mongolia were also affected on the May 8, 2008.

April 1–2, 2010 had temperatures plummet to -50 degrees in Mongolia’s Tuul valley, A nomad named Urna said she bought 400 bundles of grass to feed the animals in preparation for more bad weather. The Mongolian Red Cross has said that about 4,500,000 livestock died as a result of the bad weather this year [2010]. Tume, who lives in Ulan Bator, said that he had noticed that there were several really harsh winters in a row too. He blamed climate change, but experts said that overgrazing by cattle had also killed off most of the country’s grassland.

Mongolia known as the "Land of the Eternal Blue Sky" or "Country of Blue Sky" (Mongolian: Mönkh khökh tengeriin oron - Мөнх хөх тэнгэрийн орон) because it has over 250 sunny days a year.

Mongolia is the world's 19th-largest country (after Iran). It is significantly larger than the next-largest country, Peru. Mongolia does not share a border with Kazakhstan but its westernmost point is only 38 kilometers (24 mi) away from Kazakhstan.

The geography of Mongolia is varied, with the Gobi Desert to the south and with cold and mountainous regions to the north and west. Most of Mongolia consists of steppes, with forested areas comprising 11.2% of the total land area.  The highest point in Mongolia is the Khüiten Peak in the Tavan bogd massif. It's height is 4,374 m (14,350 ft). 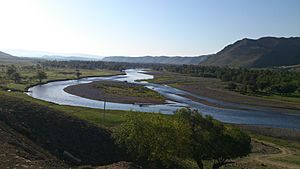 Riverine forest of the Tuul River near Ulaanbaatar.

The name "Gobi" is a Mongol term for a desert steppe, which usually refers to a category of arid rangeland with insufficient vegetation to support marmots but with enough to support camels. Mongols distinguish Gobi from desert proper, although the distinction is not always apparent to outsiders unfamiliar with the Mongolian landscape. 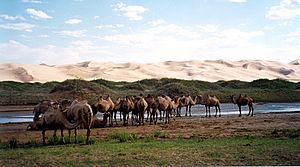 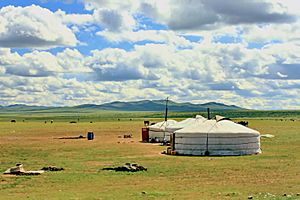 Gobi rangelands are fragile and easily destroyed by overgrazing, which results in expansion of the true desert, a stony waste where not even Bactrian camels can survive. The arid conditions in the Gobi are attributed to the rain shadow effect caused by the Himalayas. Before the Himalayas were formed by the collision of the Indo-Australian plate with the Eurasian plate 10 million years ago, Mongolia was a flourishing habitat for major fauna but still somewhat arid and cold due to distance from sources of evaporation. Sea turtle and mollusk fossils have been found in the Gobi, apart from well-known dinosaur fossils. Tadpole shrimps (Lepidurus mongolicus) are still found in the Gobi today. The eastern part of Mongolia including the Onon, Kherlen rivers and Lake Buir form part of the Amur river basin draining to the Pacific Ocean. It hosts some unique species like the Eastern brook lamprey, Daurian crayfish (cambaroides dauricus) and Daurian pearl oyster (dahurinaia dahurica) in the Onon/Kherlen rivers as well as Siberian prawn (exopalaemon modestus) in Lake Buir.

The official language of Mongolia is Mongolian, and is spoken by 95% of the population. A variety of dialects of Oirat and Buryatare are spoken across the country. Turkic languages, such as Kazakh and Tuvan, are also spoken in the western part of the country.

Russian is the most frequently spoken foreign language in Mongolia due to their diplomatic ties as former communist states. However English has been gradually replacing Russian as the second language in order to become part of the world economy. Korean has gained popularity as tens of thousands of Mongolians work and study in South Korea. Interest in Chinese has been growing because of the neighboring power.

Mongolia is currently free of bird and swine flu, but 103 air travelers who were suspected victims, and the plane crew of 6, were quarantined for 7 days in Ulaan Bator(Ulaanbaatar) in May 2009.

It may have come over the border from the Chinese province of Inner Mongolia. 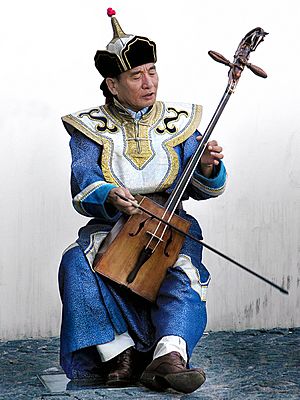 All content from Kiddle encyclopedia articles (including the article images and facts) can be freely used under Attribution-ShareAlike license, unless stated otherwise. Cite this article:
Mongolia Facts for Kids. Kiddle Encyclopedia.