Kuwait City is the capital of Kuwait. It has a population of 2.38 million in the metropolitan area. It is near the center of the country on the shore of the Persian Gulf.

It has Kuwait's parliament (Majlis Al-Umma), most governmental offices and the headquarters of most Kuwaiti corporations and banks.

On August 2, 1990, Iraqi forces invaded Kuwait and took the city. On August 8, Iraq said the emirate was their land. During the occupation, the city was badly damaged. Many buildings were destroyed, including the Kuwait National Museum. 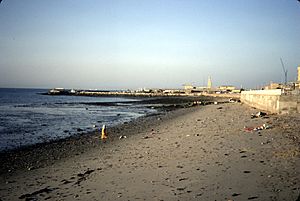 Kuwait City is twinned with:

All content from Kiddle encyclopedia articles (including the article images and facts) can be freely used under Attribution-ShareAlike license, unless stated otherwise. Cite this article:
Kuwait City Facts for Kids. Kiddle Encyclopedia.