Marseille is a city in the south of France in the Bouches-du-Rhône department. About 1.7 million people live in the metropolitan area, and about 850,000 in the city itself. This makes it the second largest city in France by number of people. It is the third largest by size. Marseille is all in the south, just at the Mediterranean sea. It has the biggest commercial port in France. The port is one of the most important ones in the Mediterranean.

Although part of the region of Provence, Marseilles has a soul of its own. Founded in 600 B.C. by the Greek sailors of Phocaea, this city is the oldest in France and probably the most complex.

The city was started around 600 BC by Greek sailors from (modern day) Foça. This was a Greek colony in Asia Minor. It is in what is now Turkey.

Marseille has a hot-summer Mediterranean climate (Csa in the Koeppen climate classification). 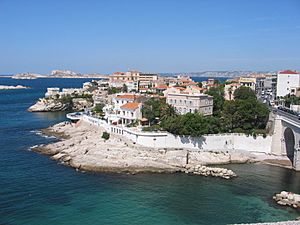 Marseille is the second-largest city in France after Paris and the centre of the third-largest metropolitan area in France after Paris and Lyon. To the east, starting in the small fishing village of Callelongue on the outskirts of Marseille and stretching as far as Cassis, are the Calanques, a rugged coastal area interspersed with small fjord-like inlets. Farther east still are the Sainte-Baume (a 1,147 m (3,763 ft) mountain ridge rising from a forest of deciduous trees), the city of Toulon and the French Riviera. To the north of Marseille, beyond the low Garlaban and Etoile mountain ranges, is the 1,011 m (3,317 ft) Mont Sainte Victoire. To the west of Marseille is the former artists' colony of l'Estaque; farther west are the Côte Bleue, the Gulf of Lion and the Camargue region in the Rhône delta. The airport lies to the north west of the city at Marignane on the Étang de Berre. 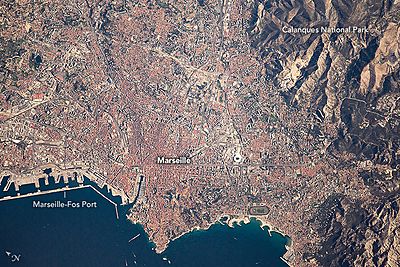 Marseille and Calanques National Park from the ISS, February 2017

The city's main thoroughfare (the wide boulevard called the Canebière) stretches eastward from the Old Port to the Réformés quarter. Two large forts flank the entrance to the Old Port—Fort Saint-Nicolas on the south side and Fort Saint-Jean on the north. Farther out in the Bay of Marseille is the Frioul archipelago which comprises four islands, one of which, If, is the location of Château d'If, made famous by the Dumas novel The Count of Monte Cristo. The main commercial centre of the city intersects with the Canebière at Rue St Ferréol and the Centre Bourse (one of the city's main shopping malls). The centre of Marseille has several pedestrianised zones, most notably Rue St Ferréol, Cours Julien near the Music Conservatory, the Cours Honoré-d'Estienne-d'Orves off the Old Port and the area around the Hôtel de Ville. To the south east of central Marseille in the 6th arrondissement are the Prefecture and the monumental fountain of Place Castellane, an important bus and metro interchange. To the south west are the hills of the 7th and 8th arrondissements, dominated by the basilica of Notre-Dame de la Garde. Marseille's main railway station—Gare de Marseille Saint-Charles—is north of the Centre Bourse in the 1st arrondissement; it is linked by the Boulevard d'Athènes to the Canebière.

Marseille is officially the sunniest major city in France with over 2,900 hours of sunshine while the average sunshine in France is around 1,950 hours. It is also the driest major city with only 512 mm (20 in) of precipitation annually, especially thanks to the Mistral, a cold, dry wind originating in the Rhône Valley that occurs mostly in winter and spring and which generally brings clear skies and sunny weather to the region. Less frequent is the Sirocco, a hot, sand-bearing wind, coming from the Sahara Desert. Snowfalls are infrequent; over 50% of years do not experience a single snowfall.

A silver drachma inscribed with MASSA[LIA] (ΜΑΣΣΑ[ΛΙΑ]), dated 375–200 BC, during the Hellenistic period of Marseille, bearing the head of the Greek goddess Artemis on the obverse and a lion on the reverse

Marseille was originally founded circa 600 BC as the Greek colony of Massalia and populated by settlers from Phocaea (modern Foça, Turkey). It became the preeminent Greek polis in the Hellenized region of southern Gaul. The city-state sided with the Roman Republic against Carthage during the Second Punic War (218-201 BC), retaining its independence and commercial empire throughout the western Mediterranean even as Rome expanded into Western Europe and North Africa. However, the city lost its independence following the Roman Siege of Massilia in 49 BC, during Caesar's Civil War, in which Massalia sided with the exiled faction at war with Julius Caesar.

Marseille continued to prosper as a Roman city, becoming an early center of Christianity during the Western Roman Empire. The city maintained its position as a premier maritime trading hub even after its capture by the Visigoths in the 5th century AD, although the city went into decline following the sack of 739 AD by the forces of Charles Martel. It became part of the County of Provence during the 10th century, although its renewed prosperity was curtailed by the Black Death of the 14th century and sack of the city by the Crown of Aragon in 1423. The city's fortunes rebounded with the ambitious building projects of René of Anjou, Count of Provence, who strengthened the city's fortifications during the mid-15th century. During the 16th century the city hosted a naval fleet with the combined forces of the Franco-Ottoman alliance, which threatened the ports and navies of Genoa and the Holy Roman Empire.

Marseille lost a significant portion of its population during the Great Plague of Marseille in 1720, but the population had recovered by mid century. In 1792 the city became a focal point of the French Revolution and was the birthplace of France's national anthem, La Marseillaise. The Industrial Revolution and establishment of the French Empire during the 19th century allowed for further expansion of the city, although it was occupied by the German Wehrmacht in November 1942 and subsequently heavily damaged during World War II. The city has since become a major center for immigrant communities from former French colonies, such as French Algeria.

Marseille is a major French centre for trade and industry, with excellent transportation infrastructure (roads, sea port and airport). Marseille Provence Airport, is the fourth largest in France. In May 2005, the French financial magazine L'Expansion named Marseille the most dynamic of France's large cities, citing figures showing that 7,200 companies had been created in the city since 2000. Marseille is also France's second largest research centre with 3,000 research scientists within Aix Marseille University.

The entrance to the Old Port, flanked by Fort Saint-Jean and Fort Saint-Nicolas

Historically, the economy of Marseille was dominated by its role as a port of the French Empire, linking the North African colonies of Algeria, Morocco and Tunisia with Metropolitan France. The Old Port was replaced as the main port for trade by the Port de la Joliette during the Second Empire and now contains restaurants, offices, bars and hotels and functions mostly as a private marina. The majority of the port and docks, which experienced decline in the 1970s after the oil crisis, have been recently redeveloped with funds from the European Union. Fishing remains important in Marseille and the food economy of Marseille is fed by the local catch; a daily fish market is still held on the Quai des Belges of the Old Port.

The economy of Marseille and its region is still linked to its commercial port, the first French port and the fifth European port by cargo tonnage, which lies north of the Old Port and eastern in Fos-sur-Mer. Some 45,000 jobs are linked to the port activities and it represents 4 billion euros added value to the regional economy. 100 million tons of freight pass annually through the port, 60% of which is petroleum, making it number one in France and the Mediterranean and number three in Europe. However, in the early 2000s, the growth in container traffic was being stifled by the constant strikes and social upheaval. The port is among the 20th firsts in Europe for container traffic with 1,062,408 TEU and new infrastructures have already raised the capacity to 2M TEU. Petroleum refining and shipbuilding are the principal industries, but chemicals, soap, glass, sugar, building materials, plastics, textiles, olive oil, and processed foods are also important products. Marseille is connected with the Rhône via a canal and thus has access to the extensive waterway network of France. Petroleum is shipped northward to the Paris basin by pipeline. The city also serves as France's leading centre of oil refining.

In recent years, the city has also experienced a large growth in service sector employment and a switch from light manufacturing to a cultural, high-tech economy. The Marseille region is home to thousands of companies, 90% of which are small and medium enterprises with less than 500 employees. Among the most famous ones are CMA CGM, container-shipping giant; Compagnie maritime d'expertises (Comex), world leader in sub-sea engineering and hydraulic systems; Airbus Helicopters, an Airbus division; Azur Promotel, an active real estate development company; La Provence, the local daily newspaper; RTM, Marseille's public transport company; and Société Nationale Maritime Corse Méditerranée (SNCM), a major operator in passenger, vehicle and freight transportation in the Western Mediterranean. The urban operation Euroméditerranée has developed a large offer of offices and thus Marseille hosts one of the main business district in France. 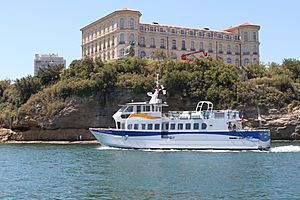 The port is also an important arrival base for millions of people each year, with 2.4 million including 890,100 from cruise ships. With its beaches, history, architecture and culture (24 museums and 42 theatres), Marseille is one of the most visited cities in France, with 4.1 million visitors in 2012. Marseille is ranked 86th in the world for business tourism and events, advancing from the 150th spot one year before. The number of congress days hosted on its territory increased from 109,000 in 1996 to almost 300,000 in 2011. 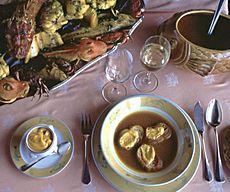 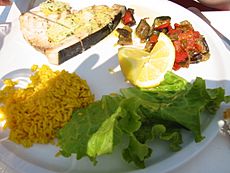 Swordfish in olive oil with ratatouille and saffron rice 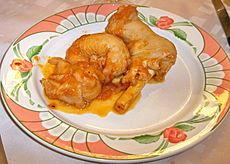 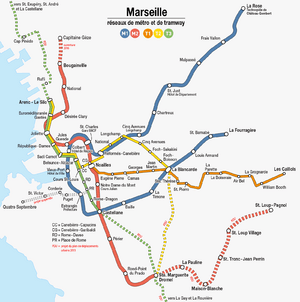 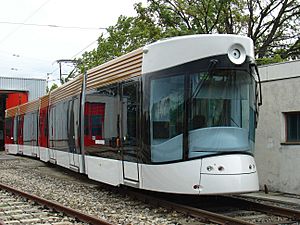 Marseille is connected by the Marseille Métro train system operated by the Régie des transports de Marseille (RTM). It consists of two lines: Line 1 (blue) between Castellane and La Rose opened in 1977 and Line 2 (red) between Sainte-Marguerite-Dromel and Bougainville opened between 1984 and 1987. An extension of the Line 1 from Castellane to La Timone was completed in 1992, another extension from La Timone to La Fourragère (2.5 km (1.6 mi) and 4 new stations) was opened in May 2010. The Métro system operates on a turnstile system, with tickets purchased at the nearby adjacent automated booths. Both lines of the Métro intersect at Gare Saint-Charles and Castellane. Three bus rapid transit lines are under construction to better connect the Métro to farther places (Castellane -> Luminy ; Capitaine Gèze – La Cabucelle -> Vallon des Tuves ; La Rose -> Château Gombert – Saint Jérome). An extensive bus network serves the city and suburbs of Marseille, with 104 lines and 633 buses. The three lines of the tramway, opened in 2007, go from the CMA CGM Tower towards Les Caillols.

As in many other French cities, a bike-sharing service nicknamed "Le vélo", free for trips of less than half an hour, was introduced by the city council in 2007.

All content from Kiddle encyclopedia articles (including the article images and facts) can be freely used under Attribution-ShareAlike license, unless stated otherwise. Cite this article:
Marseille Facts for Kids. Kiddle Encyclopedia.