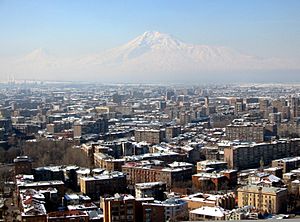 Yerevan with the mount Ararat in the background

Yerevan (Armenian: Երեւան or Երևան) is the capital and largest city of Armenia. In 2004 about 1,088,300 people lived in Yerevan. Some people write Yerevan as Erevan. In past, Yerevan was called Erebuni or Erivan.

It is on the Hrazdan River, and is the administrative, cultural, and industrial center of the country.

The history of Yerevan dates back to the 8th century BC, with the founding of the Urartian fortress of Erebuni in 782 BC. Eventually, the letter "b" in the name Erebuni changed in the 5th or 4th century BC, becoming "v".

The climate of Yerevan is continental, with dry, hot summers and cold, snowy and short winters. The temperature in August can reach 40°C (104°F), while January may be as cold as -15 °C (5 °F). The amount of precipitation is small, amounting annually to about 350 mm (14 in).

As a centre of Armenian culture, Yerevan is the site of Yerevan State University (1919), the Armenian Academy of Sciences, a historical museum, an opera house, a music conservatory and several technical institutes. The Matenadaran archives hold a rich collection of valuable ancient Armenian, Greek, Assyrian, Hebrew, Roman and Persian manuscripts. Yerevan has several large public libraries, a number of museums and theaters, botanical gardens and zoos. It is also at the heart of an extensive rail network and is a major trading centre for agricultural products. In addition, industries in the city produce metals, machine tools, electrical equipment, chemicals, textiles and food products.

Two major tourist attractions are the Opera House, the ruins of an Urartu fortress and a Roman fortress. The Armenia Marriott Hotel is in the heart of the city at Republic Square (also known as Hraparak).

The Yerevan Metro is a rapid transit system that serves the capital city. Its interior resembles that of western former Soviet nations with chandeliers hanging from the corridors. The metro stations had most of their names changed after the collapse of the Soviet Union and the Independence of the Republic of Armenia.

Yerevan is Armenia's industrial, transportation, and cultural center. Manufactures include chemicals, primary metals, machinery, rubber products, plastics, textiles, and processed food. Not only is Yerevan the headquarters of major Armenian companies, but of international ones as well, as it's seen as an attractive outsourcing location for Western European, Russian and American multinationals.

Recently, Yerevan has been undergoing an ambitious redevelopment process in which old Soviet-style apartments and buildings are being demolished and replaced with modern buildings. However, this urban renewal plan has been met with opposition and ([1] ) criticism from some residents.

All content from Kiddle encyclopedia articles (including the article images and facts) can be freely used under Attribution-ShareAlike license, unless stated otherwise. Cite this article:
Yerevan Facts for Kids. Kiddle Encyclopedia.